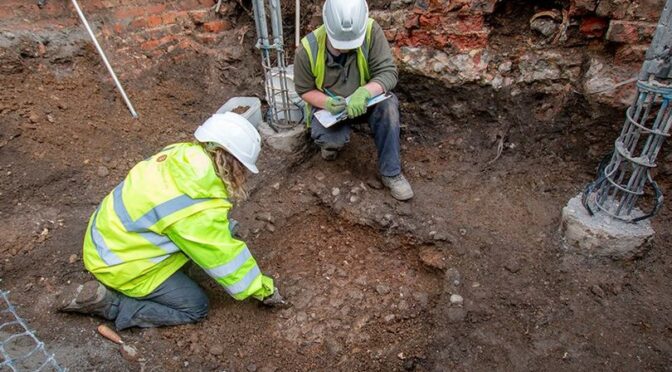 A previously unknown Roman road has been found by the archaeologist under the Guildhall as work continues to restore and redevelop the buildings.

The York Archaeological Trust (YAT) also discovered Currency and ‘an abundance of Roman pottery’ have also been found at the riverside site.

York Archéological Trust members have been working on behalf of the City of York Council for the past six months to monitor and record any archaeological deposits or features that are exposed through the ongoing redevelopment and restoration work at the site.

Some significant discoveries have already been made such an area of cobbled surface also dating back to the Roman period.

Buried over 1.5m below modern street level, the surface contained an abundance of Roman pottery and a silver coin. Furthermore, the excavation of a small trench revealed that three distinct surfaces had been laid, suggesting that it remained in use for a considerable period.

Cllr Nigel Ayre said: “ We’re delighted to see that as we restore and redevelop this collection of buildings, to secure its future in our 21st-century city, that we have the opportunity to unpack more of its history thanks to the expertise of York Archaeological Trust.

“As the city evolves and pioneers to address modern challenges and seize new opportunities, it is vital that we protect its unique heritage and share the stories we uncover along the way.”

The Guildhall restoration began in September 2019, initiating vital restoration and redevelopment of the Grade I, II* and II listed buildings, to offer office space, community use, and a riverside restaurant.

The site is due to reopen to the public in Spring 2021.