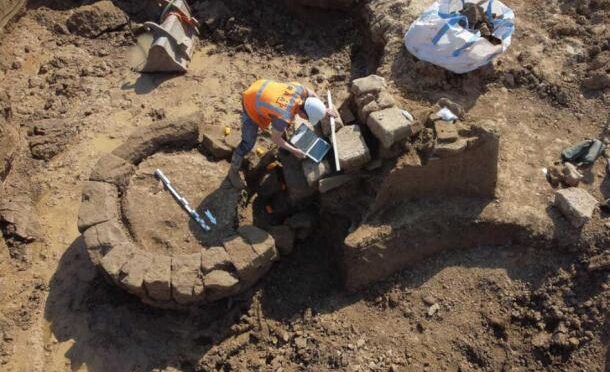 The excavation was carried out in the village of Herwin-Hemeling situated in the eastern central province of Gelderland close to the Netherland-German border, also listed as a UNESCO World Heritage site

These religious relics belonged to Netherlands’ Roman era. These were the first actual ruins of the temple found in the entire country. A part of it belonged to the northernmost territory of the legendary Roman Empire which was very powerful.

The excavation was carried out in the village of Herwin-Hemeling situated in the eastern central province of Gelderland close to the Netherland-German border. The site was situated close to Roman Limes (Limes Germanicus) UNESCO World Heritage Site.

According to a report, the Cultural Heritage Agency in a press release said,” The remains of statues of deities, reliefs and painted plasterwork have all been discovered at the site.

One particularly remarkable feature is the discovery of several complete votive stones, dedicated to various gods and goddesses. This is a highly unusual find in the Netherlands, but also in international terms.”

As per the findings, Roman soldiers erected votive stones which were small altars that were found at the Herwin-Hemeling site. These votive stones paid homage to Hercules Magusanus, a hybrid figure which represented Greek-Roman Hercules and a mythic hero, Magusanus – who was worshipped by the German tribes who had occupied the area during the Roman era.

Other artefacts that were discovered were Jupiter and Serapis, a syncretic deity which represented the king Roman gods Jupiter and the Egyptian god known as Serapis. Along with these, Mercury, a Roman god was also erected. He was a messenger between the realm of the living and the land of the dead.

Along with religious findings, other military objects were also discovered like battle armour, horse harnesses and spears and lances.

Archaeologists were aware of the possible Roman settlement in the area before they began the excavation process. In 2021, archaeologists discovered a few ancient Roman artefacts there.

According to the Dutch national cultural heritage agency, archaeologists informed the authorities of the possibility of the discovery of artefacts on a larger scale. The research team discovered remains of two Roman-era temples which dated long back to the first and fourth centuries.

Archaeologists uncovered a large Gallo-Roman temple on a hill which displayed a tiled roof and brightly painted walls. The second temple which was discovered was smaller and was situated a few metres from the first temple. The area suggested an important and pious gathering place for Roman soldiers.