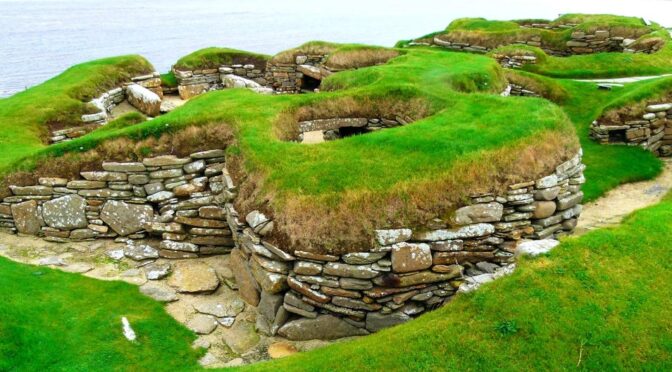 The Scotsman reports that erosion on the island of Orkney at the northern end of the Bay of Skaill has exposed deer antlers, a boar tooth, a cattle jawbone, and a large stone marked with incised triangles and a series of rectangular bands.

The artifacts were found about a half-mile away from the site of the Neolithic village of Skara Brae, which is located at the bay’s southern end.

Skara Brae is considered the best-preserved Neolithic settlement in Western Europe with people first making their home there around 3,100BC.

It was discovered in 1850 when a storm exposed part of the coastal site. Now, almost 170 years later, coastal erosion may have uncovered its neighbour.

A section of badly damaged wall has been exposed by the work of the pounding tides at the north end of the Bay of Skaill. Deer antlers, a boar tooth, a cattle jawbone, and a large decorated stone have also been discovered.

Sigurd Towrie, the spokesman for the Archaeology Institute at the University of Highlands and Islands, said the finds “suggest there is another settlement at the Bay of Skaill – one that, from previous environmental sampling, is likely to be 4,000 to 5,000 years old”.

He said: “If this is the case, and based on the scale of the eroded section, we may well be looking at a Neolithic/Bronze Age site on a par with Skara Brae – albeit one that is now disappearing at an alarming rate.”

The large decorated stone was discovered in the Bay of Skaill by Mr. Towrie after he noticed animal remains falling from an eroding section of shoreline.

Closer inspection found the stone marked with a pair of incised triangles and a series of rectangular bands running across the surface.

Dr. Antonia Thomas, the Archaeology Institute’s rock art specialist, confirmed the find was potentially a carved stone – one with designs similar to those recorded at Skara Brae.

It has long been thought that more Neolithic settlements may have dotted the bay surrounding Skara Brae. During building work in the 1930s, a wall was discovered to the north of the bay along with midden material, animal bone, and four burials, which were later moved.

The new finds have refreshed interest in who may have lived around the bay during the New Stone Age.

The discovery of deer remains is an unusual find for a Neolithic site on Orkney, with the animal perhaps used for rituals rather than food, it is understood.

The Bay of Skaill is now under close observation from the archaeology institute, although an excavation is unlikely in the near future given restrictions imposed by the coronavirus pandemic.

Mr. Towrie said: “UHI Archaeology Institute will continue to carefully monitor the extent of the coastal erosion and act as an when necessary.”

Skara Brae is considered the best-preserved prehistoric settlement of any period in the British Isles. Its preservation in the sand has left a vivid impression of life in a prehistoric village.

An ‘exceptional’ collection of artifacts recovered from the site tell a story of farming and fishing among its inhabitants, as well as jewellery making and crafts.

One of the houses at Skara Brae contains a hearth and stone beds. One bed, which is decorated, lies directly over the burial site of two mature women laid to rest in a crouched position.