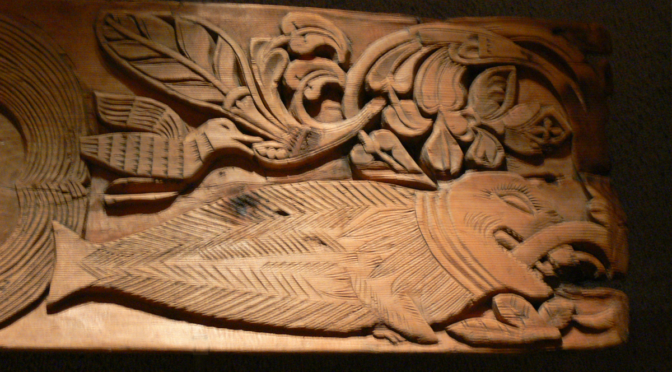 In Iceland, there are no walruses, but there were hundreds at one time . The time of the disappearance of the walruses indicates the loss of population may be one of the earliest known examples of people leading a sea species to local extinction.

The ghost of walruses past

Walruses used to be a major feature of life in Iceland. Several settlements and landmarks along Iceland’s coast still bear names that refer to walruses, and a few of the medieval Sagas (the stories of the island’s early settler families) even mention them.

The Saga of Hrafin Sveinbjarnarson, written down sometime in the late 1100s, tells the story of a chieftain who killed a walrus and brought its tusks and skull to Canterbury Cathedral in England. But the walruses themselves have been reduced to only a few ancient bones and tusks.

Did the walruses disappear before or after the Norse arrived? In other words, did the Norse kill off Iceland’s walruses, or did the population die of natural causes? Because Iceland has no living walruses today, historians have debated whether the place names referred to places where walruses were living when people arrived or just places where settlers found the skulls and tusks of long-dead animals.

The walrus tusks that Hrafin Sveinbjarnarson delivered to England could have been part of a thriving Icelandic walrus population, but it could also have been only a lost wanderer from more distant shores.

To learn more about Iceland’s pinniped past, evolutionary genomicist Xenia Keighley of the University of Copenhagen and her colleagues’ radiocarbon dated and sequenced DNA from 34 samples of bones and tusks from walruses in the Icelandic Museum of Natural History.

The DNA studies also showed that Iceland’s long-lost walruses were a distinct branch of the walrus family. The oldest walrus remains in the museum, dating to 5502-5332 BCE, were related to the ancestors of today’s Atlantic walrus population.

More recent samples, though, belonged to a separate mitochondrial branch of the walrus family tree, genetically distinct from every group that’s known in the North Atlantic—including the older Icelandic walruses.

“I would suspect that the most recent clade represent a colonization event that replaced the lineage represented by the old sample, rather than the old sample being a direct ancestor to the more recent clade,” co-author Morten Olsen, also an evolutionary genomicist at the University of Copenhagen, told Ars.

Radiocarbon dates of the bones, combined with the walruses’ genomes, provided an estimate of the size of their breeding population, which suggested that walruses had lived on Iceland’s coasts for around 7,500 years.

Although their numbers had been small—perhaps around 1,000 walruses at any one time—their foothold on the island had been pretty stable until around 1213-1330 CE, well after Norse settlement began in 870 CE.

So what happened to Iceland’s walruses? As always, the answer is complex, but much of the blame falls squarely on the shoulders of the Norse.

Settlers arrived in Iceland and began hunting walrus for the European ivory trade at a time when Iceland’s walrus population was already struggling with a shifting environment and a series of volcanic eruptions.

Walrus ivory was a major trade commodity in markets across Europe for much of the early Middle Ages, and the Norse hunted walrus around most of their territory in the North Atlantic.

According to a 2020 study of DNA from walrus skulls and tusks found in Western European archaeological sites, most of Europe’s supply of walrus ivory came from a walrus clade (a group of related animals with a common ancestor) living in Greenland, which was home to tens of thousands of walruses.

Iceland’s much smaller walrus population would have been a drop in the bucket by comparison, but the ivory trade would still have put pressure on Iceland’s small population.

When the first Norse hunters reached them, Icelandic walruses were already facing challenges from the Medieval Warm Period (700 to 1100 CE).

A few centuries of relatively warm climate in the North Atlantic were helpful to human explorers, but not so great for walruses, which rely on sea ice as a place to haul themselves out of the water. And at the same time, volcanoes erupted several times near some of the walruses’ key haul-out sites on land. It’s no wonder the walruses couldn’t survive all of that and Vikings.

Some evidence suggests that a Roman fishing industry may have wiped out grey whales in the North Atlantic a few hundred years before the Viking Age, but otherwise, the Norse may have been the first to wipe out a whole population of animals for profit.