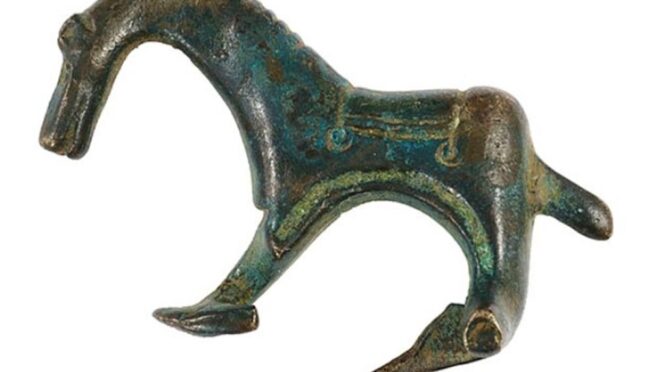 Over recent years, metal detectorists have made a wonderful collection of historical discoveries. In the UK a detector has discovered in a plowed field a very rare and beautiful Roman Brooch. It is only the second of its kind to have even been found in the country.

The search was carried out on a field in Lincolnshire, East England, near the village of Leasingham.

Jason Price, 48, is a former member of the British military. He was participating in an event called ‘Detecting for Veterans’ according to the Sleaford Standard. This was a charity event, to raise funds for veterans and took place in the summer of 2019.

On the last day of the event, Mr. Price found the Roman brooch. “It was the last field of the weekend and it was heavily plowed – so I didn’t hold out much hope of finding anything”. Suddenly his detector starting buzzing and the excitement of a potential find mounted.

Mr. Price found the Roman brooch on the last day of the event. The Daily Mail quotes him as saying that, “It was the last field of the weekend and it was heavily plowed – so I didn’t hold out much hope of finding anything”. Suddenly his detector starting buzzing and the excitement of a potential find mounted.

He started to dig carefully and some 8 inches (20 centimeters) in the earth he found something he thought was only a piece of junk. Mr. Price told the Sleaford Standard that “At first I thought it was a piece of litter, but as I cleaned it off, my jaw dropped open. There it was – a horse brooch. I was shaking”.

The veteran knew he had found something remarkable. In the past, he has unearthed several items including some coins. As required by law, Mr. Price notified the relevant authorities about his find.

The Daily Mail quotes Lisa Brundle, who oversees such finds for the local Lincolnshire County Council, as saying “This brooch is an exciting and rare discovery”. There is only one other known to have been found in Britain and it is currently held at the world-famous British Museum.

A preliminary analysis of the brooch indicated that it was made of a copper alloy and probably dated to 200-400 AD when Britain was a province of the Roman Empire. The Roman brooch is in remarkably good condition and it still has its original pin attached.

It is approximately 2 inches (5 centimeters) long and weighs about 0.80 of an ounce (23 grams). It depicts the horse in great detail and even shows it with a saddle. Originally the horse would have had a gold finish and many of its details would have been enameled with bright colors.

The brooch is considered to be somewhat more detailed than the one found in the British Museum. It is also decorated somewhat differently. Ms. Bundle told The Times that the Roman brooch “is in a league of its own”. The artifact has been called the ‘Leasingham Horse’ after the location where it was found.

This item would have been something of a status symbol. The gender of those who would have worn the item is not known, but the horse design may mean that it was worn by a male.

How the item came to be buried in the field is something of a mystery. It may have been lost or deliberately buried during one of the many raids by barbarians on Roman Britain. Mr. Price is not going to cash in on his amazing discovery.

According to The Daily Mail, “the brooch has been sent out on a permanent loan by Mr. Price to the Collection Museum in Lincolnshire”. The item will undoubtedly become a very popular attraction with local people and visitors alike.