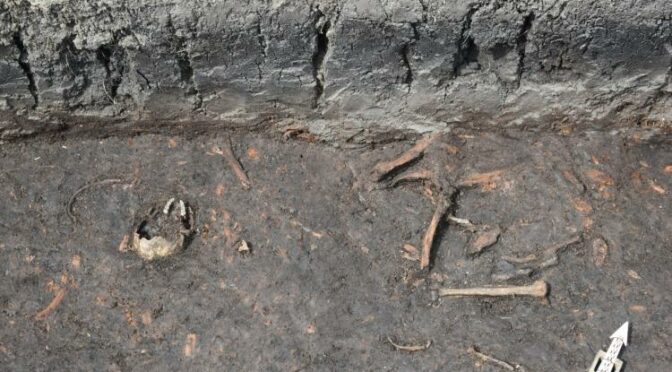 Warrior graves dating back 2,000 years have been found by archaeologists near Bejsce in the province Świętokrzyskie. The cremated remains were accompanied by weapons: iron swords and spear or javelin heads. According to the archaeologists, the newly discovered cemetery covers around 1 ha.

The grave was found after surface surveys were carried out in some arable fields in the spring this year by archeologists.

The archeological team decided to further excavate after finding a large number of burnt bones in their early search.

Although many of the remains have been badly damaged, the team discovered 20 graves over an area of 200 square meters.

Jagiellonian University research project leader Jan Bulas said: “We don’t know precisely how many graves in the cemetery were since our research is still at the early stage. We are working on the cemetery.

“The graves are destroyed and often spread over a large area of the field.”

He added: ”Heavily corroded and seemingly shapeless objects turned out to be fragments of swords or iron fibulas.” The team discovered in a total of four swords, and nine spearheads, as well as some mysterious square structures.

The structures have a square base and a triangular cross-section and are baffling archaeologists as to their use. Mr. Bulas hazarded a guess that they might have been used to demarcate space in cemeteries for individual families.

He explained: ”Similar structures, so-called grooved objects, are known from other cemeteries from this period in southern Poland, but their function is still unclear.

“In Bejce, they contained fragments of ceramic vessels as well as metal objects.”

The archaeologists believe that the dead warriors were members of the Przeworsk culture. Mr. Bulas thinks that they could have been representatives of the Lugii tribal union.

The Lugii was a large tribal confederation mentioned by Roman authors living in around 100 BC–300 AD.

Among the easternmost Celtic tribes in Germania, the Lugii lived in the area which today roughly forms the meeting point between eastern Slovakia, southern Poland and western Ukraine (an area which was later known as Galicia).

The Lugii may also have resided farther north, in Pomerania, prior to moving south. They played an important role on the middle part of the Amber Road from Sambia at the Baltic Sea to the Pannonia, Noricum and Raetia provinces of the Roman Empire.

The Lugii has been identified by many modern historians as the same people as the Vandals, with whom they must certainly have been strongly linked during Roman times.

Intriguingly, a tribe of the same name, usually spelled as Lugi, inhabited the southern part of Sutherland in Scotland.

Controversy exists as to whether particular tribes were Germanic or Celtic, and the Lugii is one of those tribes which may straddle both definitions because they were a tribal confederation rather than a single tribe.

The Lugi name appears to have been based on the name of the Celtic god, Lugus. He is more commonly known as the Irish Lugh or Lug (probably cognate to the Latin ‘lux’, meaning ‘light’).