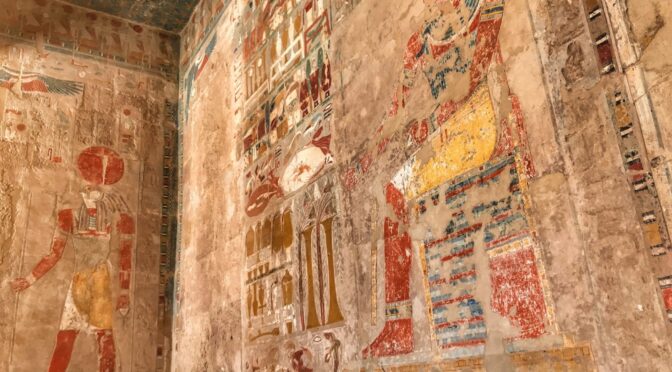 The artists and sculptors of ancient Egypt may not be household names like Michelangelo, Raphael, or Caravaggio, but a new study of a female pharaoh’s temple suggests they had a lot in common with their Renaissance brethren. Instead of being solo artisans, sculptors worked in teams, with talented masters overseeing large crews of rookie chiselers and other assistants.

Archaeologists say the study’s approach of scrutinizing the sculptors’ thousands of strokes is novel in Egyptology, which has long focused on interpreting written records. It reveals both the resources—and passion—ancient Egyptians poured into their art.

“The artists who created all this really flew below the Egyptological radar,” says Dimitri Laboury, an Egyptologist at the University of Liège who was not involved in the study. “But those artists were key figures in a society which invested so much in artistic production.”

For almost 2 centuries, researchers regarded tomb and temple decorations not as works of art in their own right, but as sources of information about ancient Egyptian religious beliefs. And artists in ancient Egypt didn’t sign their work, further pushing them into the background.

As a result, little is known about individual Egyptian artists and their methods, despite the key role paintings and reliefs played at a time when most people were illiterate.

Textual evidence hints at the presence of sculptors and painters but rarely the details of their work or who they were.

To better understand the work that went into decorating ancient temples, University of Warsaw archaeologist Anastasiia Stupko-Lubczynska and colleagues studied the temple of Hatshepsut, who ruled between 1478 B.C.E. and 1458 B.C.E. and was one of Egypt’s few female pharaohs. Her temple, which stretches 273 meters by 105 meters, was built almost 3500 years ago at Deir el-Bahari, near modern-day Luxor.

In a 70-square-meter room at the back known as the chapel of Hatshepsut, two 13-meter-long walls are carved with seemingly endless processions of men carrying offerings—sheaves of wheat, baskets of birds, and other goodies—to the seated Hatshepsut. The 200 figures occupy two-thirds of the room’s wall space.

Stupko-Lubczynska was there as part of a painstaking—and ongoing—effort by the University of Warsaw’s Polish-Egyptian expedition to clean and restore the temple’s damaged walls. Before conservationists cleaned the figures, Stupko-Lubczynska and a team of draftspeople spent hundreds of hours between 2006 and 2013 documenting the chapel walls by hand, copying the carvings on sheets of plastic film at a one-to-one scale. “We had to repeat the process done by the carvers, drawing all their lines, duplicating their steps,” she says.

In the process, the archaeologist identified tiny details in the soft limestone of the chapel, including clumsy chisel strokes and later corrections.

“Because we have so many figures with repetitive details, we can compare the details and workmanship,” Stupko-Lubczynska says. “If you look at enough of them, it’s easy to see when someone was doing it properly.”

Slowly, she and her colleagues began to see subtle variations in what had seemed like an army of cut-and-paste icons. And some figures were visibly worse—legs and torsos with sloppily chiseled edges, or multiple chisel blows to shape wig curls that only took two or three expert strokes elsewhere.

The analysis also showed the work was a team effort, done in phases by different artists, Stupko-Lubczynska reports today in Antiquity. “The wig can be awfully done, and in the same figure, the face is perfect,” she says.

“Maybe the master artisans came in at the end to finish the figure.” With no natural light in the cavernous, windowless hall, there must have also been assistants holding oil lamps crowding onto the scaffolds.

Laboury likens the effort to the busy workshops of Renaissance painters, where the master focused on the most challenging tasks while delegating backgrounds, supporting characters, and prep work to trainees.

Evidence that more skilled hands were correcting beginners’ mistakes suggests that even a pharaoh’s temple was seen as a place to school rookies. “You have more experienced hands next to less experienced hands,” Laboury says. “The master was training apprentices on the spot.”

“This study really adds to our understanding of craftsmanship and the way these ancient artists worked,” says Gabriele Pieke, an Egyptologist at the Reiss-Engelhorn Museum in Mannheim, Germany. She and others hope the look behind the scenes at Hatshepsut’s chapel will help raise the profile of the skilled artists responsible for so much of what we marvel at in ancient Egyptian tombs and temples.

After spending so much time tracing the work of long-gone artists, Stupko-Lubczynska says she began to feel a connection with—or at least empathy for—the long-suffering apprentices. “I like it more when somebody made a mistake or failed,” says. “You can feel that they were normal people like us, who could be tired or hungry or ill.”