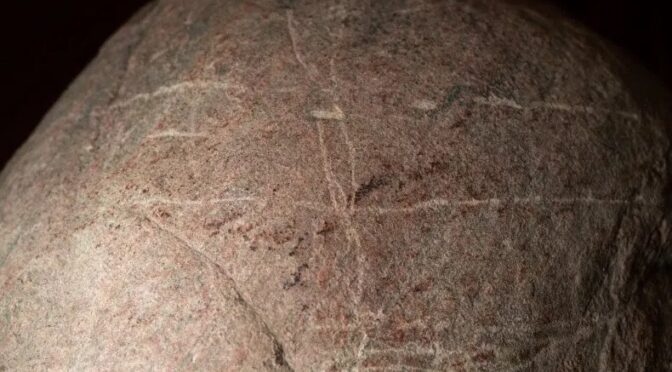 While feeding bison, a man discovers a rare 1,000-year-old rock carving by accident

An archaeologist has discovered rock carvings dating back over 1,000 years at Wanuskewin Heritage Park, Saskatchewan, Canada. What makes the discovery even more remarkable is that it happened completely by accident.

Wanuskewin’s chief archaeologist, Ernie Walker, made the discovery in the summer of 2020 while out feeding bison in a paddock located 800 meters west of the Wanuskewin building, it was announced on Friday.

As they were rolling around in the dirt wallowing, the bison had cleared a patch of ground where Walker spotted a boulder peeking through the dirt. Further inspecting the rock, the archaeologist noticed grooves that formed a definite pattern. Walker was able to determine that the boulder was actually a petroglyph.

Walker says that the boulder is a “Ribstone” resembling the bones of a bison and representing fertility, carved over a thousand years ago. He goes on to explain that he had searched the area previously but had missed the petroglyph.

Following this discovery, as the Ribstone was being excavated, Walker and his team turned up three more petroglyphs, as well as the tool that they believe was used to make the carvings.

“This is tremendously significant and very unusual,” Walker says. “Whoever did that, left it there or misplaced it, probably over a thousand years ago. I like to think it’s their business card. They left their business card here.”

The Wanuskewin Heritage Park team estimates that the petroglyphs date back anywhere between 300 and 1,800 years, when placed into the context of historic events this gives a probable age of 1,000 years old.

“It is extremely rare to find four carved boulders together, and even more rare to locate the carving tool used to make them.

A truly remarkable story, however, is the bison,” the team said in a press release. “Had they not been reintroduced to their traditional land— after being hunted nearly to extinction in the 1870s—this important scientific discovery would have remained hidden.”

Bison were reintroduced to Wanuskewin Heritage Park after an absence of over 150 years in 2019.

The reintroduction of the animal was part of a $40-million revitalization that included conservation efforts to repopulate bison numbers across North America.

“The discovery of these petroglyphs is a testament to just how sacred and important this land is,” CEO of Wanuskewin Heritage Park, Darlene Brander, said.

“The individual who made these petroglyphs was actually carving their legacy into the rock many years ago.”

The Wanuskewin Heritage Park, located on Opimihaw Creek, a tributary of the South Saskatchewan River, is currently applying for the status as a United Nations Educational Scientific and Cultural Organization Heritage site. Brander believes that this could be the deciding factor in that application.