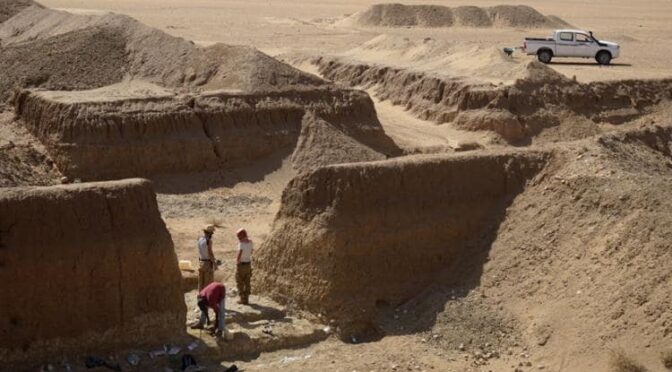 In an ancient gold mine in the Eastern Sahara, some of the earliest evidence of human existence going back 1.8 million years have been unearthed. Archaeologists from the University of Wroclaw discovered a cache of artefacts from the African variety of Homo erectus, the ancestor of humans (Homo sapiens), around 70 kilometres east of Atbara.

Included among the hundreds of artefacts were massive, almond-shaped cleavers resembling fists, weighing several kilograms, and with chipped edges on both sides forming a pointed tip at the junction.

“In the eastern part of Sudan, in the Eastern Desert, like in many places in the Sahara, a gold rush broke out. People were looking for this valuable ore in makeshift, open-cast mines. While exposing subsequent layers, miners came across several-hundred-thousand-year-old tools.”

By examining layers of soil and sand above the objects using the optically stimulated luminescence (OSL) method the archaeologists were able to determine the age of the tools.

Research project leader Professor Mirosław Masojć from the Institute of Archaeology of the University of Wrocław said: “It turned out that they were about 390,000 years old.

This means that the layers below are certainly older. Based on the workmanship, I believe that the tools may be over 700,000 years old, perhaps even a million years old, like their counterparts discovered further in the south of Africa.”

Previously, Professor Masojć’s team previously had discovered hand axes and other tools, but never ones that were technologically so close to those from equatorial Africa, or that old.

It is now thought that in the place where the artefacts were discovered, there used to be a workshop where tools were made because both finished ‘products, as well as flakes formed during their production, have been preserved.

Masojć added that these are the oldest known human creations with such a well-confirmed chronology from Egypt and Sudan. He said: “Ancient tools are found in deserts, but never before have they come from layers that would allow to safely determine their age.”

So far, researchers have found nearly 200 sites where Palaeolithic stone products have been preserved. Some of them are in mines (these are located about 350 km north of Khartoum).

They find all sorts of tools used by both Homo erectus and Homo sapiens. The age of the tools varies greatly, from over half a million to 60,000 years.

Masojć said it cannot be ruled out that there are even older artefacts in the deeper parts of the mines, but added that accessing them is currently difficult.

He said: “The last research season took place at the end of 2019 when the political situation was very tense, and ultimately there was a coup in Sudan and the long-standing regime was overthrown.

The work was very difficult in terms of logistics: there were fuel shortages, we had to avoid protests, people were dying.”

Researchers from Saudi Arabia, South Korea, Germany and the US were involved in the project financed by the National Science Centre. The research results have just been published in the prestigious journal Plos One