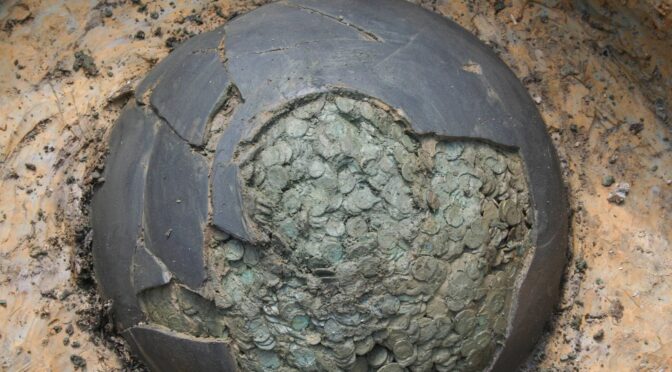 Found with a metal detector: 52,503 bronze and silver Roman coins in a ceramic pot

The Frome Hoard is a hoard of 52,503 Roman coins found by metal detectorist Dave Crisp near Frome in Somerset, England.  The coins were contained in a ceramic pot 45 cm (18 in) in diameter, and date from AD 253 to 305.

Most of the coins are made from debased silver or bronze. The hoard is one of the largest ever found in Britain and is also important as it contains the largest group ever found of coins issued during the reign of Carausius, who ruled Britain independently from 286 to 293 and was the first Roman emperor to strike coins in Britain.

The Museum of Somerset in Taunton, using a grant from the National Heritage Memorial Fund (NHMF), has acquired the hoard, officially valued at £320,250.

The hoard was discovered while Crisp was metal detecting in a field near Frome where he had previously found late Roman silver coins.

The late Roman coins, eventually totalling 62, were probably the remnants of a scattered hoard, 111 of which had been found on the same farm in 1867.

Whilst searching for more coins from the scattered hoard he received what he called a “funny signal” and on digging down about 35 cm (14 in) he found a small radiate coin and the top of the pot. Realizing that this must be an intact coin hoard he stopped digging and filling in the hole he had made.

Crisp notified Katie Hinds, the Portable Antiquities Scheme Finds Liaison Officer for Wiltshire, that he had found the hoard of coins.

Hinds, together with Anna Booth (Finds Liaison Officer for Somerset) and Alan Graham—an independent archaeologist contracted by Somerset County Council—visited the site to carry out an emergency excavation.

The excavation, led by Graham and assisted by Hinds, Booth, Crisp, and members of the landowner’s family, was performed over three days.

Graham initially excavated a 1.5 meters (4.9 ft) trench around the small hole that Crisp had dug and identified the pit in which the pot had been deposited.

A small black-burnished ware bowl had been inverted over the mouth of the larger pot, to form a lid.

First, he excavated the pit fill around the exterior of the pot, identifying organic matter which might represent packing material to protect it, and determined that the pot had been broken in situ long before its discovery.

He then excavated the pot itself. Due to the weight of the contents, the need for speedy excavation due to security concerns and the difficulty in lifting the broken pot with the contents still inside—which would be the preferred archaeological method, so that the contents could be excavated in controlled, laboratory conditions—the decision was taken to excavate the coins in the field.

The coins were removed in 12 layers, by which method it was hoped to determine if there was any chronological pattern in the deposition of the coins; that is, whether the earliest coins were at the bottom and the latest coins at the top.

The coins were collected in 66 labeled bags, and in total weighed approximately 160 kg (350 lb). Graham excavated and recorded the finds, and the others bagged the coins as Graham lifted them out.