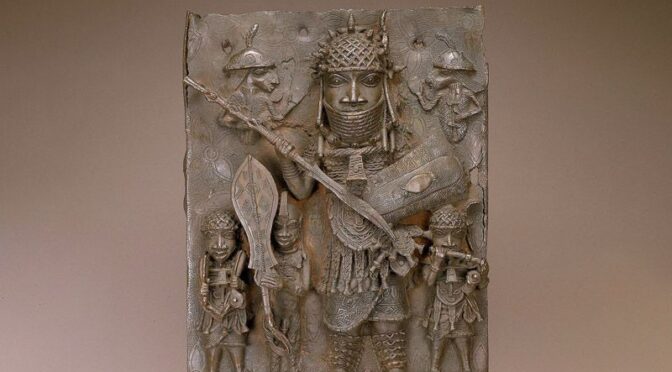 Germany Will Return Benin Bronzes to Nigeria in 2022

After museum experts and political leaders reached an agreement on Thursday, Germany expects to return the antique, pillaged artifacts known as the Benin Bronzes to Nigeria next year. During a military expedition to the kingdom in what is now Nigeria in 1897, the majority of the artefacts were looted by British forces.

The 16th-18th century metal plaques and sculptures that decorated the royal palace of the Kingdom of Benin are among the most highly regarded works of African art. They are now scattered around European museums. After the decision on Thursday, the next step will be to develop a road map for the return, which should be completed in the next few months.

That will mean inventorying all the items by June 15, followed by a meeting on June 29 to consider the best approach.

Germany puts museum cooperation with Africa on the agenda

“We have been working intensively for months to create the framework conditions for this,” he said, adding: “We have put the issue of museum cooperation with Africa on the political agenda and sought dialogue with our Nigerian partners, the architect and the initiators of the Benin Museum.”

“From archaeological cooperation to the training of museum managers and assistance with cultural infrastructure, we have put together a package and are continuing to work on it with our Nigerian partners.”

Nanette Snoep, a Dutch anthropologist and curator from the Rautenstrach-Joest-Museum in Cologne, said, “museums and politicians have become aware of the fact that it is really necessary to decolonize museums. And decolonizing also means restitution.”

With this decision, Culture Minister Monika Gruetters said, “We want to contribute to understanding and reconciliation with the descendants of those whose cultural treasures were stolen during colonization.”

The debate over Benin bronzes gains momentum in Germany

Hermann Parzinger of the Prussian Cultural Heritage Foundation said the goal is to return the first items by 2022. He said talks are planned with the group’s Nigerian counterparts to ensure “substantial returns and future cooperation.”

Those would include talks about allowing some of the items to remain on display in German museums. However, Snoep says this decision must be made by the Nigerians.

The famous bronzes are to be found in a number of German museums. The Berlin Ethnological Museum holds around 530 artefacts from the kingdom of Benin, including around 440 bronzes.

Some 180 of the bronzes are due to be exhibited this year in Berlin’s Humboldt Forum, a new museum complex that opened in December.

The restitution debate began many years ago but was largely ignored by Western museums. It was also a taboo topic among anthropologists. According to anthropologist Snoep, a lot of Africans began making the call decades ago. “African intellectuals first started this debate. Now we only hear the voices of Western museum directors and politicians. But the good fight started in Africa,” Snoep said.

The curator adds that she hoped “it doesn’t become a white on white dialogue again.”

Most European former colonial powers have begun a process in recent years of considering the return of looted artefacts to the former colonies, especially in Africa. Last month, the University of Aberdeen in Scotland agreed to return a Benin Bronze sculpture to Nigeria, saying it was acquired by British soldiers in 1897 in “reprehensible circumstances.”

That decision raised pressure on other establishments, including the British Museum, to follow suit. The British Museum meanwhile is reportedly considering lending its Bronzes to Nigeria.

In Nigeria’s capital Abuja meanwhile, many people welcomed the announcement, describing it as a historic moment for Nigeria. “I think it is a good development because those artefacts are our history in physical form,” said Okwuchi Jim-Nna. “It shows that Africa in general and Nigeria, in particular, has values and they are beginning to respect the culture of the people,” Steve Farunbi added.

Jemilah Idomas said it was a “laudable effort” by Germany. “Kudos to the German Government.”

However, a few Nigerians meanwhile believed their country was not ready to host the artefacts. “Bringing such artefacts into the country which have immeasurable value will not serve the purpose,” Samson Orija argued. “We are not ready, yet. I think they should still hold onto it.”

“With the insecurity now, the safety of those artefacts cannot be guaranteed,” said Shegun Daramola. “So, until we are ready they should still hold onto it. When they bring it now maybe another country will steal it. Or it gets missing within the country or gets destroyed.”

Museum to be built in Benin City

Nigeria plans to build a museum in Benin city to house the looted artefacts after they are returned, a €3.4 million scheme in which the British Museum will participate. Late last year, France approved the restitution of 26 items from the Kingdom of Dahomey, located within present-day Benin, which had been pillaged in 1892.

“Restitution is really righting [the wrongs] of your own history. And so that’s why African voices are crucial in this debate, that we do not, as white directors, recolonize a debate about restitution,” said anthropologist Nanette Snoep.