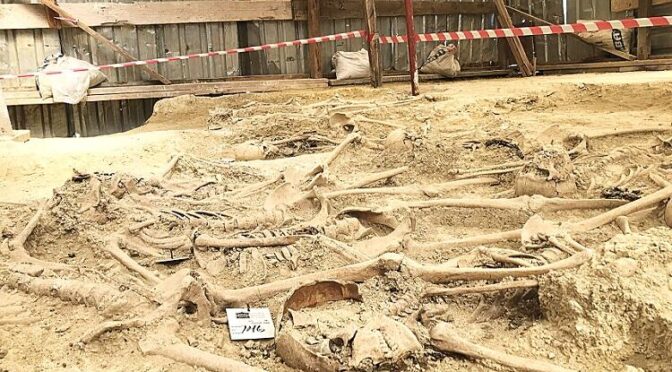 The corpses of 30 Ottoman soldiers are discovered in Istanbul’s neighborhood. Rahmi Asal of the Istanbul Archeology Museums Department said the men had served in the Balkan War’s 86th Ottoman Army Battalion.

A mass grave belonging to soldiers who died while serving in the Ottoman Army’s 86th Regiment in what is today an Istanbul suburban district during the Balkan War has been unearthed.

Thirty soldiers ‘ graves were discovered in Çatalca during excavations carried out prior to the “Martyrdom Museum” project proposed by the Istanbul Archeology Museums Directorate.

The names of five of the Ottoman seals on the soldiers who were buried with their clothes were identified.

These findings include officer seals with many uniform buttons and belts, belt buckles, one compass, many tobacco layers and cigarette holders, bayonets, many mirrors, and two rings.

Some names were also reached from the seals that came out of five of the soldiers determined to be the officers of the 86th Regiment from their collar numbers.

Mehmet Nuri, Necmettin and Osman Binveli, three of the dead soldiers, are believed to have been officers in their division.

The two killed soldiers buried a little away from others were Daniel and Avedis, non-Muslim Ottoman officers who fought against Bulgarian soldiers.

In the Balkan War in 1912, the Ottoman state entered the war against the revolting states of Bulgaria, Greece, Serbia, and Montenegro.

As the invaders advanced to Çatalca, soldiers from all over the country started fighting to stop them. The soldiers who set out from the southern province of Antalya’s Alanya district also walked on the roads for days and joined the troops on the front.

Alaiye (Alanya) Reserved Battalion, consisting of Alanians from the 86th Regiment, repelled the enemy and began to rest by deploying in positions around Dağyenice village.

Bulgarian soldiers infiltrating the positions attacked the Alaiye Battalion and slaughtered 657 Ottoman soldiers overnight. After this painful incident that occurred on the night of November 17, 1912, this hill started to be known as “Alaiye Martyrdom.”