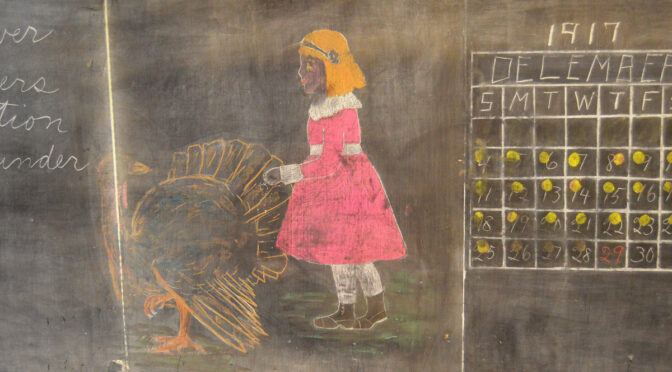 Sherry Read Math teacher Classroom is a total mess. The students are gone for the summer, and light fixtures dangle from the ceiling.

There is a dust layer on the floor. The worker’s rackets down the corridor during the refurbishment of the school, which dates back to the 1890s. They’re working in what has become an archaeological site.

Another discovery was made earlier this month by a construction crew from Oklahoma City School.

They found old chalkboards with class lessons that were written almost a century ago, and chalk drawings still in remarkably good condition. So Read doesn’t mind the mess. In fact, she’s amazed.

“It’s like touching history, like being a part of what was going on during the day,” she says. “It’s just remarkable and mysterious, trying to figure out what some of this was.”

The biggest mystery is an old multiplication wheel. It’s a circle with factors on the inside and other numbers on the outside. No one can figure it out.

But there’s no mystery about when the lessons were written. It was 1917, right after Thanksgiving. There is a turkey and pilgrim theme in every room.

One picture shows a little girl feeding a turkey. She’s in a pink and white knee-length dress and stockings; bright yellow curls frame her face. The picture is intricate, so detailed it must have been drawn by a teacher’s hand.

There’s also music and civics lessons, and rules for keeping clean. A vocabulary list highlights words like “blunder” and “choke” written in smooth cursive. Even the word “whoa” is listed because many people got around on horse and buggy back then.

Also on the board, a list of student names frozen in time.

“We’re not sure if that meant they were good students for the day, or they accomplished that,” Read says. “Or were their names up there because they were bad for the day?”

These snapshots are fragile. A simple, misplaced elbow can wipe them away. So school officials are now trying to figure out the best way to preserve these illuminating bits of the past.

Jeff Briley of the Oklahoma Historical Society says it’s important to secure the rooms by protecting chalkboards with acrylic glass and then controlling the temperature and light.

“They’re meant to be fleeting,” he says. “Chalk on a blackboard is not meant as a permanent media at all.”

He said everyone wants to preserve the blackboards, but they’re too fragile to move. So the old lessons may become part of the modern classrooms.

“If you make it secure, you make it to where there are no physical problems, you give it a stable environment, well then you’ll be good perhaps for another 100 years,” Briley says. Sherry Read says she gets a nice vibe from the chalkboards. She thinks the teachers of 1917 left the lessons for a reason.

“You would have cleaned off your board so you could be ready the next day to come back and teach,” she says. “So I think they left them on there on purpose to send a message to us, to say, ‘This is what was going on in our time.'”

Blackboard drawings are the fruit flies of art. They have short lifespans. That’s why the folks at Emerson High are scrambling. They want to preserve these snapshots from a century ago for future generations of Oklahoma students.