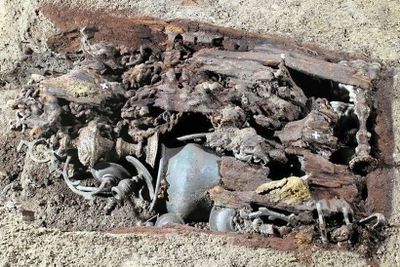 A decaying box buried in a synagogue in Małopolska has revealed a treasure. 350 valuable pieces were found in a discovery that was proclaimed sensational by archaeologists at Wieliczka’s Old Synagogue.

The archaeologists were digging a small test hole by a wall inside the synagogue when they noticed a fragment of a decayed wooden box, inside which were a collection of metal objects that had been tightly packed together, often one inside another.

Dr. Michał Wojenka from the Institute of Archaeology of the Jagiellonian University, who was supervising the dig, commented that if the test hole had been dug just a little further away, the treasure would have remained hidden.

The treasure in the 80 cm high, 70 cm wide and 130 cm long crate includes a silver cup, five candlesticks, the parts for four or five brass chandeliers, two probably silver-plated candlesticks and two large brown vessels with decorative handles and Hebrew inscriptions, as well as cap badges of infantry officers of the Austro-Hungarian army.

The objects probably come from the 19th century. The wooden planks that formed the box were preserved only in fragments, but the objects filling it tightly were in good condition.

“We tried to methodically expose subsequent layers of earth in order to reveal the top of the box. After completing documentation work, we started exploring the box and taking out more objects from it,” says Dr. Wojenka.

Two of the silver or silver-plated items are the ornamental finials of the rods on which the Torah scroll is wound.

The box also contained a silver badge from a cloth Torah covering with a representation of stone tablets. A silver chain is attached to it with a pointer used for reading the Torah.

The discovery brings with it more questions than answers. A big clue as to the time when the treasure chest was buried comes from the 18 officers’ cap badges, which feature the initials of Austro-Hungarian emperor Franz Joseph, which places the treasure chest in the late 19th or earlier 20th century.

The presence of military cap badges with synagogue ornaments is strange though.

Dr. Wojenka suggests that army caps could have been used to line the crate as all the metal badges were found at the bottom and the moist conditions would have rotted the cloth of the hats away.

The next mystery is who buried the treasure. The Austro-Hungarian cap badges are a heavy indication that the synagogue fittings were not buried during World War Two.

It is known that in 1914, the town was occupied by the Russian army after the Austro-Hungarians withdrew having lost fighting for Kraków.

The work at the Old Synagogue in Wieliczka is being carried out by experts from the Institute of Archaeology of the Jagiellonian University. The temple dates back to the second half of the 18th century and is located in the former Jewish district of the town.

During World War II, the building was devastated by the Nazis. After 1945 is was used as a warehouse and the building served this function until the beginning of the 21st century.

The Jewish community in Wieliczka dates back to the 14th century when Jews were granted rights to use the salt mine in the town. By 1921, there were 1,700 Jews living in Wieliczka.

On September 7, 1939, the town was occupied by the Germans. During the summer of 1942 Jews from the rest of the county were concentrated in Wieliczka.

The Jewish community was annihilated on August 27, 1942, when 8,000 Jews from Wieliczka and the surrounding area were deported to the Belżec death camp, 500 were sent to the Stalowa-Wola forced-labour camp, and 200 were sent to the Płaszów concentration camp.