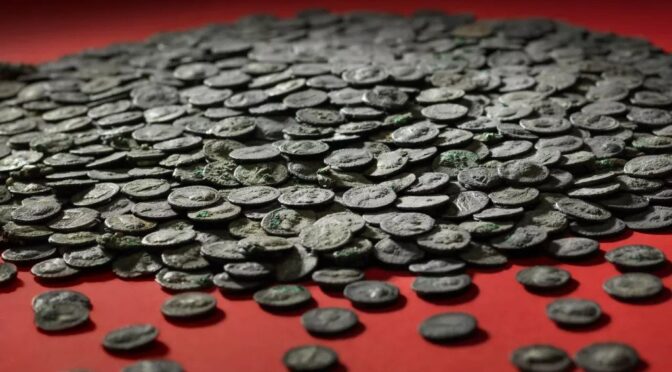 More than 5,500 silver coins buried by a river about 1,800 years ago are now in the hands of archaeologists, following the hoard’s discovery in Augsburg, Germany.

At the time of the coins’ burial, the Roman Empire was in full swing, with its coinage reaching all corners of its territory and beyond.

These coins “are denarii, the standard silver denomination during the 1st-early 3rd century [A.D.],” Stefan Krmnicek, a professor of ancient numismatics (the study of coins) at the University of Tübingen in Germany, told Live Science in an email.

Archaeologists found the hoard earlier this year in an old riverbed. But though the coins were scattered in the newly dug pit, that likely wasn’t how they were originally placed.

“The place of hiding was probably washed away many centuries later by a flood of the Wertach river, scattering the coins in the river gravel,” Krmnicek said.

“We have just started cleaning and studying the material,” but so far, it appears that “the youngest coin of the hoard was minted at the beginning of the 3rd century [A.D.], thus dating the deposition of the hoard in the early 3rd century,” Krmnicek said.

“We currently hypothesize that the hoard was buried in the early 3rd century outside the Roman city of Augusta Vindelicum, near the Via Claudia Augusta [a Roman road] running there.”

At that time, Augusta Vindelicum was the capital of the Roman province of Raetia, Krmnicek said. Why the hoard was buried is an ongoing mystery that researchers are trying to solve.

“We do not yet know why the hoard was deposited,” Krmnicek said, noting that Leo Brey, a doctoral candidate at the University of Tübingen, is trying to solve this “riddle” in his research.

The hoard was excavated by Sebastian Gairhos, director of the Archaeological Service of the City of Augsburg. No artefacts other than the coins were found with the hoard.