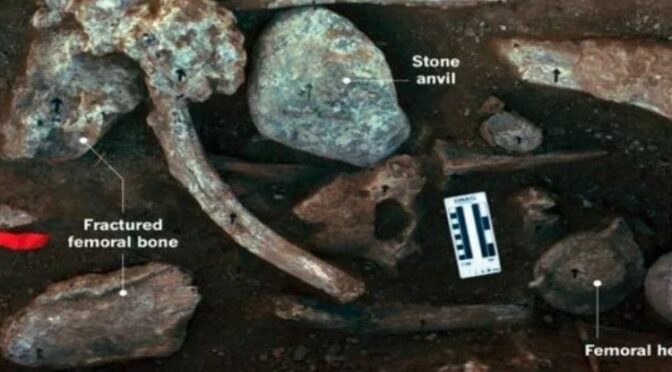 Three years ago, a team of archaeologists in the United States proposed an extraordinary idea: the first human settlers in the Americas arrived at least 100,000 years earlier than we thought.

The evidence came from a collection of mastodon bones and ancient stones dating back to around 130,000 years ago, which appeared to have been hammered and scraped by early humans.

The remains were found in the suburbs of San Diego in the 1990s, and the researchers think that the nearby stones may have been used as hammers and anvils to work on the bones. But outside of that, no other traces of human activity were found.

Today, the Cerutti Mastodon (CM) site remains one of the most controversial archaeological digs in the world. For years, scientists have been going back and forth over the results and whether or not they indicate the presence of humans in North America 130,000 years ago, but the original authors are not giving up.

The team has now published a follow-up paper that claims to have found traces of ancient mastodon bones on the upward-facing sides of two cobblestones collected from the site.  According to the paper, mastodon bones were indeed placed on top of these rocky ‘anvils’ and struck with some sort of hammer – presumably by humans. If the bones were merely in passive contact with the rocks, you would expect to see their influence everywhere they were touching, not just the top part.

There also doesn’t appear to be any modern contamination, the authors add. The ancient artefacts were found near a road work site, so some critics think the bones were broken and scraped by the activity of trucks and other similar disturbances.

While this is very much possible, researchers say it doesn’t explain the residue on the stones. When collecting bones and stones from the site, the team in San Diego claims to have taken great care. They say there was no opportunity for bone material to disintegrate or “float” into the air and onto a stone at the original site or in the lab afterwards.

Even in the soil, bone residues from these mastodons were discovered at much lower concentrations than what was measured on some parts of the cobblestones.

“Fossil bone residues documented with the Raman microscope were only found in residue extractions sampled from the potentially used surfaces and are therefore considered to be more likely use-related,” the authors write.

“As our investigations have indicated that the bone residues are less likely to originate from sediments or contact with bones in the bone bed as discussed above, the most parsimonious explanation is that the residues (and wear) derive from deliberate contact with bone. We consider this scenario to be the most likely.”

Still, there is one key missing ingredient: collagen. This is an important part of mammal bones, and if stones were used to break apart the mastodon skeleton, you’d expect to find some traces of collagen.

It’s very possible that the collagen in this case had already disintegrated from the passing of time. Or it could be that measurements simply didn’t pick up on its presence. But archaeologist Gary Haynes, who was not involved in the study, told Science News he thinks the more likely scenario is that road work vehicles buried these stones next to the mastodon bones, long after their collagen had disappeared.

He’s not the only one who’s sceptical. Today, most evidence suggests human settlers arrived in the Americas roughly 14,000 to 20,000 years ago. A date of 130,000 years is quite the claim, and it requires extraordinary evidence, which some scientists argue is lacking. A rebuttal to the original 2017 paper argued that other processes outside of human hammering produced bone damage, especially from heavy construction equipment.

Even before humans came along there was probably disturbance in the area. Over time, as fluvial deposits slowly covered the remains, these mastodon bones would have remained somewhat flexible, and this means they could have been trampled, displaced, fractured, abraded and reoriented by other mammals that used the ancient muddy watercourse.

“The extraordinary claim by Holen et al. of prehistoric hominin involvement at the CM site should not be contingent on evidence that is open to multiple, contrasting interpretations,” the authors of the rebuttal argue.

“Until unambiguous evidence of hominin activities can be presented, such as formal stone tools or an abundance of percussion pits, caution requires us to set aside the claims of Holen et al. of prehistoric hominin activities at the CM site.”

Shortly afterwards, the original authors wrote a rebuttal to the rebuttal. In it, they argued that there is no evidence of fluvial deposits and that the bones were broken before they were buried and not trampled afterwards.

“Healthy scepticism is the foundation of good science, and the publication of this discovery is the beginning of a scientific debate, which I welcome and encourage,”  Tom Deméré, a palaeontologist at the San Diego Natural History Museum and one of the original authors, argued a few years ago.

“What I didn’t expect was the reluctance of scientists to engage in a two-way conversation to objectively evaluate our hypothesis.”

Archaeologist David Meltzer from Southern Methodist University is sceptical but open to the debate. He says he could be convinced that humans arrived in the Americas 100,000 years earlier than we thought, but that he hasn’t seen enough evidence yet.

“Given everything we know, it makes no sense,” he told Nature in 2018. “You’re not going to flip people’s opinion 180 degrees unless you’ve got absolutely unimpeachable evidence, and this ain’t it.”

Perhaps this new bout of evidence will help clear up some of that doubt. More likely than not, however, it will merely trigger a series of new rebuttals.