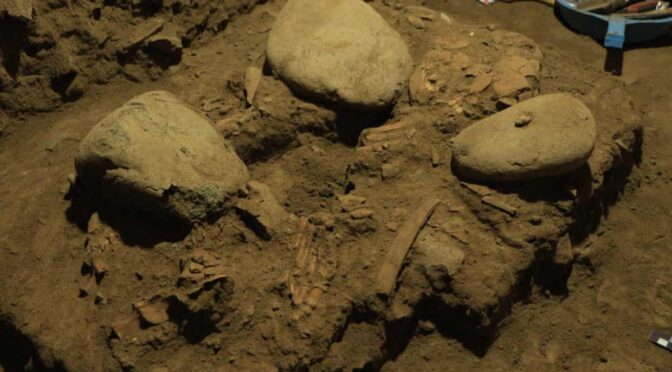 Archaeologists have discovered ancient DNA in the remains of a woman who died 7,200 years ago in Indonesia, a find that challenges what was previously known about the migration of early humans.

The remains, belonging to a teenager nicknamed Bessé, were discovered in the Leang Panninge cave on the Indonesian island of Sulawesi. Initial excavations were undertaken in 2015.

The discovery, published in the journal Nature, is believed to be the first time ancient human DNA has been discovered in Wallacea, the vast chain of islands and atolls in the ocean between mainland Asia and Australia.

The DNA was extracted from the petrous part of Bessé’s temporal bone, which houses the inner ear.

“There’s only one or two pre-neolithic skeletons that have yielded ancient DNA in all of mainland south-east Asia.

“Elsewhere in the world – in the northern latitudes of Europe, in America – ancient DNA analysis is completely revolutionising our understanding of the early human story: the genetic diversity of ancient humans, population movements, demographic history.”

The researchers describe Bessé as a “genetic fossil”. Genetic sequencing showed she had a unique ancestral history not shared by anyone living today, nor any known humans from the ancient past, Brumm said.

Around half of Bessé’s genetic makeup is similar to present-day Indigenous Australians and people from New Guinea and the Western Pacific islands.

“Her ancestors would have been a part of the initial wave of movement of early humans from mainland Asia through these Wallacean islands towards what we today call Sahul, which was the combined ice age landmass of Australia and New Guinea,” Brumm said.

Surprisingly, Bessé’s DNA also showed an ancient link to east Asia, which challenges what was previously known about the timeline of migration to Wallacea.

“It is thought that the first time people with predominantly Asian ancestry entered the Wallacean region was around about three or four thousand years ago when the first prehistoric neolithic farmers entered the region from Taiwan,” Brumm said.

READ ALSO: THEY REBUILD THE FACES OF EGYPTIAN MUMMIES FROM THEIR 2,000-YEAR-OLD DNA

“If we’re finding this Asian ancestry in a hunter-gatherer person who lived thousands of years before the arrival of these neolithic people from Taiwan, then it suggests … earlier movement of some population from Asia into this region.”

Bessé is also the first known skeleton belonging to the Toalean culture, a group of hunter-gatherers who lived in South Sulawesi between 1,500 and 8,000 years ago.

She was around 17 to 18 years old at the time of burial. Prehistoric stone tools and red ochre were found alongside her remains. Her grave also contained bones of hunted wild animals.