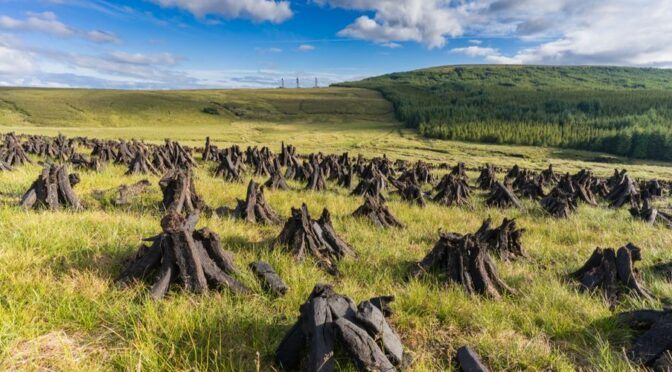 Ireland is famous for its peat bogs – peat is an accumulation of partially decayed vegetation or organic matter. They are the most efficient carbon sink on earth and cover 1.4 million square miles of the earth. They also tend to preserve bodies and artefacts that wind up in them, so they are a great source of archaeological findings of the Neolithic and Iron Age periods.

Peat bogs don’t normally make the top lists of things to see and do while in Ireland, but they are a window into the past. Another attraction in Ireland is Sean’s Bar – it is reputed to be the oldest pub in Europe having been established in 900 AD.

The Development Of The Peat Bogs Of Ireland

Bogs are one of the things that characterize Ireland. They cover around 1,200,000 hectares or around a sixth of the island. Only Finland has more bogs relative to its size than Ireland in Europe.

There are two very distinctive types of bogs blanket bogs and raised bogs.

Blanket bogs are found wherever there is high rainfall and in Ireland, that’s particularly in the west. They are by far the largest in Ireland and have formed because of human interaction.

After the Ice Age, Ireland was slowly colonized and covered with forests and by 4000 BC Ireland was almost entirely forested. Then the Neolithic Age farmers came and started to clear the land to build farms. First, they cleared the upland areas because forests were not so thick there. But without the trees, the nutrients in the soil became washing out (or leached). The soil became more acidic and the land became waterlogged.

By the Bronze Age around 500 BC, farmers were clearing the lower lands as the uplands were no longer usable. But the debris did not decompose and a layer of peat began to build up. The peat also buried the remains of the Neolithic farms.

By the Norman era around 1,000 AD, the lowlands were almost completely devoid of forests and blanket bogs were well established.

Preserved Kings, Sacrifices, And Artifacts In The Bogs

Go to the National Museum of Ireland and one will see the Kingship and Sacrifice exhibit. It is the result of findings from the museum’s Bog Bodies Research Project. The project was initiated following the discovery of two Iron Age bog bodies at Oldcroghan, Co. Offaly, and Clonycavan, Co. Meath.

The remains of these bodies were dated to between 40 BC and 200 BC and were notable for being in a good state of preservation. The museum offers exhibits based on the theory that human sacrifice and the deposition of the victims in bogs along tribal boundaries are related to sovereignty and kingship rituals during the Iron Age.

Some exhibits include preserved bodies, royal regalia, weapons, boundary markers, horse trappings, and other artefacts. The exhibits also delve into what has been discovered in other Iron Age bogs in Denmark, Germany, The Netherlands, and England.

One can also learn about Cashel Man. He was found naked in at least two meters of peat with his head, neck, and left arm removed by the milling machine.

He was a young adult male and the wounds on his body suggest he had been the victim of human sacrifice (there were injuries on the lower back and a broken arm). Although the cause of death was not possible to know because of the damage from the milling machine.

It is known that in the past the ritual killing of young men took place in ancient Ireland.

“Beneath the wild boglands of north Mayo lies a system of fields, dwelling areas and megalithic tombs which together make up the most extensive Stone Age monument in the world.”

The Céide Fields is an archaeological site in the west of Ireland and is described as the most extensive Neolithic site in Ireland. It has the oldest known field system anywhere in the world and is thought to be around 5,500 years old.

Today it is on UNESCO’s tentative list to be World Heritage-listed and was originally discovered in the 1930s.

It wasn’t for another 40 years that they were studied archaeologically. What was discovered under the peat bog was a complex of fields, houses, and megalithic tombs concealed by the growth of blanket bogs over the course of many centuries.

The people who lived there were farmers who cleared large areas of forest to farm.

As of the time of writing the site is closed to the public because of ongoing work, check their website for current information.