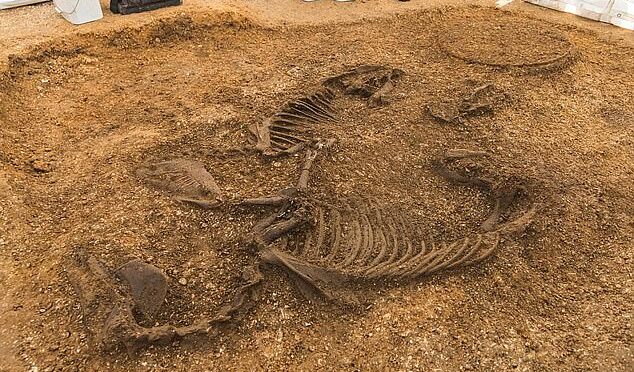 The Ancient Brits loved their wheels. Indeed they seem to have been so attached to the sports-car-style chariots that they may even have thought they could use them to get to the next world.

Academic knowledge about these elegant high status prehistoric British vehicles is now set to increase significantly, following the discovery of an ancient Briton buried inside his chariot in East Yorkshire.

Although around 20 other similar chariot graves have been found over the past century or so in the UK (mainly in Yorkshire), this new discovery, unearthed on the outskirts of the market town of Pocklington at the foot of the Yorkshire Wolds, is the only example ever excavated by modern archaeologists in which the two horses, used to pull the vehicle, were also interred.

What’s more, the burial forms part of one of the most important Iron Age funerary complexes found in Britain over the past half-century.

The Pocklington chariot burial, excavated over the past two months, was the final resting place of an upper-class Iron Age Briton – probably a warrior – who lived in the third or fourth century BC. It is possible that he was a member of an ancient British tribe called the Parisi (or their ancestors) – a culture related to other Iron Age peoples in Northern France.

Excavating his grave, archaeologists from a Yorkshire-based company MAP Archaeological Practice – have found the stain ‘imprints’ left in the ground by the rotted wood of the 12 spokes of one of the chariot’s wheels; the iron tyre (which would have gone round that wheel); the stain imprint of the chariot’s central timber pole (which connected the vehicle to the two horses pulling it); the stain imprint of the box-shaped compartment that the driver (and potentially one companion) stood in; the two horses used to pull the vehicle; the bridle bit; the iron nave hoop band (which went around the axle); and the remains of the driver himself.

The only missing element (almost certainly destroyed by mediaeval ploughing) is the second wheel.

The Ancient Brits were unusually attached to their chariots. While in continental Europe, chariots had largely gone out of fashion (except for racing) by the mid-1st century BC, in Britain they persisted until at least the seventh decade of the first century A.D.- a generation or so after the Roman conquest).

The first chariots seem to have been invented in south-western Siberia (in modern Russia) and in northern Kazakhstan in around 2000 BC. By 1500 BC they had spread to Anatolia (what is now Turkey), Egypt, India and China. By 1300 BC they were being used in Europe – and by 500 BC they had been introduced into Britain

Now scientists are set to study DNA and isotopic evidence from the Pocklington chariot and other burials. The find will also enable archaeologists to compare this chariot to the other examples that have been discovered in Yorkshire in the past – and to definitively confirm the buried chariot drivers gender and possibly his ethnic origin.

“This discovery provides valuable additional evidence demonstrating how the Ancient Britons loved their chariots. As research progresses, it’s becoming ever clearer just how important these beautiful high status wheeled vehicles were to them. Indeed Roman historical sources even describe how the Iron Age Britons used their chariots to demonstrate driving skills, to show off and to intimidate their enemies”, said a leading chariot burial expert, archaeologist, Dr Melanie Giles of the University of Manchester.

“It is conceivable that the dead man’s family and his community believed that the chariot would help him to reach the next world or would be useful to him when he got there,” she said.

The burial forms part of a remarkable cemetery in which at least 142 Iron Age people were interred – mainly under a series of large earthen mounds.

Among the most significant graves, excavated over the past three years, is that of a warrior buried on top of his large roughly rectangular wooden shield (with the shield’s leather strap arranged around him, so that the decorative bronze strap fastener or other fitting was positioned on top of his torso).

Another particularly interesting grave is that of a possible enemy warrior. He had died very violently and had sustained serious injuries (possibly caused by a club and a sword) and was buried at much greater than normal depth. Interring a person face down in an unusually deeply dug grave is believed to have been seen as a way of preventing an angry, bitter or evil deceased individual, perhaps even an enemy, from rising from the dead and haunting or hurting the living. It was, potentially, a measure to combat revenants.

A third particularly interesting burial was that of a warrior, interred with his sword, who had been subjected to a bizarre post-mortem ritual. While he lay in his open grave, the attendees at his funeral (perhaps even his warrior comrades) had ritually hurled six spears into his dead body. The grave was then filled up with earth – with the corpse still pierced by the spears. It seems to have been a very special funerary ritual of which only around a dozen other examples are known (perhaps reserved for individuals who had fought particularly bravely in battle or who had distinguished themselves in some other way).

Other individuals whose graves have been excavated at the site include a woman wearing bronze bracelets and a bronze brooch with three Mediterranean-originating coral beads inlaid in it; a warrior, buried with his spear (and a large storage pot – probably for food or alcoholic beverage); and a young 17-20-year-old woman, afflicted with very severe pelvic and spinal arthritis, who had died at (or approaching) childbirth.

“This spectacular group of graves is yielding extremely important new information about Iron Age life and culture. It is one of the most significant Iron Age funerary complexes discovered in Britain over the past half-century,” said one of the archaeologists involved in the project, Dr Peter Halkon of the University of Hull.

Although almost all British chariot burials are from East Yorkshire, archaeological evidence clearly shows that these vehicles were used for transport in most parts of Britain.

It is known that at least 700 probable chariot fittings (mainly iron and bronze axel linchpins and the rings through which the horses’ reins passed) have been found by metal detectorists and archaeologists around the country. Indeed some of them – especially the linchpins – probably became separated from chariots when the vehicles crashed or rolled over on difficult terrain, despite them having a top speed of only around 30 mph.