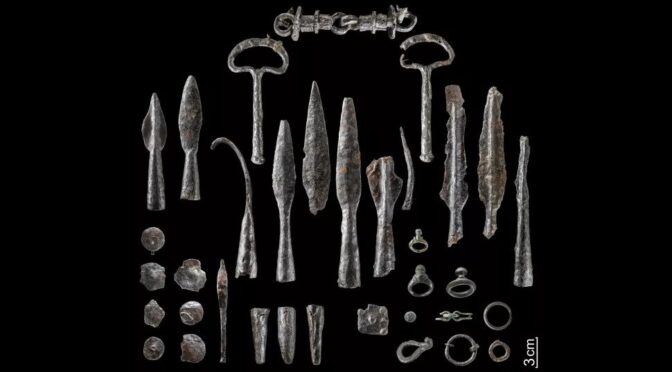 Live Science reports that a metal detectorist working with the Regional Association of Westphalia-Lippe archaeologists has discovered more than 150 objects at Wilzenberg, an Iron Age hillfort site in western Germany.

The hoard contains more than 150 objects, including deliberately bent weapons, such as 40 spearhead and lancehead tips, swords and fragments of shield bosses (round structures at the centre of a shield); tools; belt hooks; horse gear; three silver coins; bronze jewellery; and one fibula, or lower leg bone, Manuel Zeiler, an archaeologist at LWL, told Live Science.

“The arsenal is the largest in [the German state of] North Rhine-Westphalia and also links the [state’s region of] Sauerland with complex processes in Iron Age Europe,” Michael Baales, an LWL archaeologist and head of the Olpe branch in North Rhine-Westphalia, said in a translated statement, released March 31.

Moreover, the damaged weapons — which ancient people would have purposefully destroyed by bending them — shed light on how victorious Iron Age warriors treated the losing side’s arsenal, Baales said.

Researchers have known about a possible hoard at the Iron Age hillfort for several decades. In the 1950s, while workers were constructing a pavilion, “two swords wrapped in two spearheads and two lanceheads were discovered by chance,” Zeiler said.

The swords were bent, and their tips had been purposefully deformed, he noted. But it wasn’t until 2013 that archaeologists did a more thorough excavation at this spot to discover the full context of the archaeology there, Zeiler said.

From 2018 through 2020, metal detectorist and local history researcher Matthias Dickhaus, who worked with the LWL and the town of Schmallenberg, searched the site for additional metal artifacts.

In all, Dickhaus hit the jackpot, finding 100 objects, the LWL reported. Among the findings, archaeologists marvelled over a rare type of horse bridle.

“The existing handle parts for guiding the horse suggest that this type of bridle was used on horses that were pulling a chariot,” the LWL wrote in the statement. “The bit allowed the horse to be steered very precisely and directly — vital for a warrior on a chariot in the thick of a battle.”

The hillfort, Zeiler added, is located on the 2,158-foot-tall (658 meters) Wilzenberg mountain. This site was visited by people during the Iron Age, from about 300 B.C. to the birth of Christ, and the walls of the ancient hillfort, known as the Wallburg, are still visible today, largely seen by pilgrims and hikers who frequent the mountain.

Although the hillfort at Wilzenberg is far away from the centres of Celtic culture in other parts of continental Europe, its architecture and the hoard’s bent objects are “comparable with the Celtic culture,” Zeiler noted.

Celtic and other Iron Age cultures are known to have bent the weapons of a defeated enemy in a similar way to the newfound hoard. For instance, archaeological investigations at sanctuaries in Gournay and Ribemont-Sur-Ancre in France “shows that weapons of conquered warriors after the battle were destroyed by the winner,” Zeiler said. “This ceremony was possibly the last step to celebrate the triumph.”

The new analysis of the hoard shows that “far away from the Celtic civilization, people celebrated a triumph after battle similar to the Celtic world,” Zeiler told Live Science.

Despite the many weapons and parts of horse gear found at the hillfort, there’s no evidence of an epic battle there, Zeiler noted.

“The damage was clearly not caused during a fight, and consequently the Wilzenberg is not a battlefield,” Zeiler said in the LWL statement. Many of the weapons cannot be precisely dated, so it’s not clear whether they were damaged and laid down over the centuries, or whether they were deliberately twisted at a single event, he said.