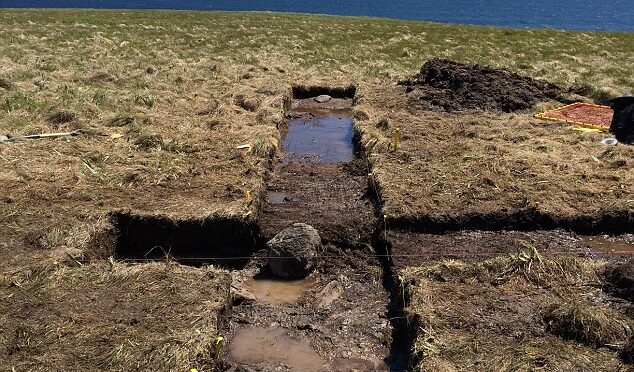 Is this the rock that proves Vikings did discover America?

They are infamous for terrorising the coastlines of Europe in their distinctive longships, but the Vikings may be able to claim another victory over their medieval neighbours. New evidence has been uncovered that suggests the Vikings may have discovered North America nearly 500 years before Christopher Columbus made his famous journey to the New World. Scientists claim to have uncovered what they believe to be a Viking settlement on the Canadian island of Newfoundland that appears to have been built between 800AD and 1300AD.

It is only the second known Viking site to be discovered in North America and helps to confirm that they were the first Europeans to reach the New World. This new site, discovered in an area called Point Rosee in southern Newfoundland, is 400 miles (643km) south west of a Viking settlement found in L’Anse aux Meadows during the 1960s. Archaeologists said the discovery potentially opens ‘a new chapter’ in history by showing the Vikings had explored far further into the New World than previously believed possible.

Dr Sarah Parcak, an archaeologist at the University of Alabama, Birmingham, explained: ‘This new site could unravel more secrets about the Vikings, whether they were the first Europeans to ‘occupy’ briefly in North America and reveal that the Vikings dared to explore much further into the New World than we ever thought.

‘Typically in archaeology, you only ever get to write a footnote in the history books, but what we seem to have at Point Rosee may be the beginning of an entirely new chapter.’

The Vikings are well known to have been adept seafarers, using the sun and the stars to help pick their way across open stretches of ocean away from the coastline. It is thought the Vikings first discovered America by accident in the autumn of 986AD, according to one historical source, the Saga of the Greenlanders. It tells how Bjarni Herjolfsson was stumbled across North America after being blown off course as he attempted to sail from Norway to Greenland, but he did not go ashore. Inspired by his tales, however, another Viking Leif Ericsson then mounted his own expedition and found North America in 1002.

Finding it fertile land, rich in grapes and berries, he named it Vinland. Eriksson also named two further ‘lands’ on the North American coast – one with flat stones, which he called Helluland, and one that was flat and wooded, named Markland. The discovery of the settlement at Point Rosee now helps to confirm that these legends were in fact true. The settlement uncovered by Dr Parcak, who has been working with the BBC and a team of experts, was initially spotted using high resolution near-infrared images taken by satellites.

Over time the structures have altered the soil and the way it retains moisture, changing the vegetation that grow above, making it possible to see the outline of the structures in satellite images. These helped them identify intriguing patterns in Point Rosee, which indicated there were some manmade features and the possible outline of a longhouse similar to those used by the Vikings. During excavations of the site, the team uncovered evidence possible bog iron ore processing.

The settlement at L’Anse aux Meadows was the only other site where pre-Columbian iron processing has been found in North America. The archaeologists discovered around 28lbs of slag in a hearth that they believe was used to roast iron ore before it was smelted in a furnace. Blackened stones, scorched by the extreme heat in this process, were also unearthed at the site.

While Inuits are thought to have used some iron from meteors, there is no other evidence of indigenous people processing iron.  The longhouse building they identified appears to have been built using turf, in much the same style as other Viking structures. Black bands in the soil as the team excavated betrayed the presence of turf building blocks that had been used to construct a building. Douglas Bolender said: ‘Right now the simplest answer is that it looks like a small activity area maybe connected to a larger farm that’s norse.

‘If we were in Iceland we wouldn’t think twice about that. But the thing that makes you pause and check every last little bit of it, is that it is in Newfoundland.’

If they are right, it means Rosee Point is the most westerly Viking outpost yet discovered. Dr Bolender told National Geographic it could mean that the Viking sagas detailing journey’s to what has been interpreted as North America are true rather than merely legends.

He said: ‘We’re looking here because of the sagas. Nobody would have ever found L’Anse aux Meadows if it weren’t for the sagas. But, the flipside is that we have no idea how reliable they are.’

Although the archaeologists leading the excavation are convinced the site was inhabited by Vikings, they say further work is needed to conclusively prove it was a Viking settlement. Nonetheless, Professor Judith Jesch, director of Nottingham University’s Centre for the Study of the Viking Age who was not involved in the discovery, described the find as ‘exciting’.

She told the told The Telegraph that L’Anse aux Meadows may have been a way-centre as the Vikings ventured further south and that it is likely other sites may yet be unearthed.

She said: ‘Finding Vikings in the United States is the Holy Grail for many people, not least because there are many Americans of Scandinavian descent who would like to think that they were following in the footsteps of their ancestors.

‘But I don’t think they made significant progress past New Brunswick, in Canada.’

The discovery is outlined in a one-off 90 minute BBC documentary called Vikings Uncovered. It will be aired on BBC One in the UK. During the program, historian Dan Snow travels throughout the lands inhabited by the Vikings to explore just how far their influence spread.

Among the other discoveries outlined in the documentary are the remains of a battlefield in Estonia. Smashed bones were found alongside weapons and a Viking ship burial. In Portmahomack in Easter Ross, in the Scottish Highlands, archaeologists have discovered evidence that a monastery there was utterly destroyed by a Viking raid. Smashed sculptures were found with the ashes of the buildings of what had been once a prosperous community.

Skull fragments found at the site – thought to have belonged to monks – reveal the violence of the attack. Speaking about the find in Newfoundland, Mr Snow said: ‘The Vikings Uncovered was one of the most exciting projects of my career.

‘I was able to follow Dr Sarah Parcak and her team as they carried out pioneering research, using satellite imagery, in an attempt to unlock one of history’s greatest mysteries.

‘Were the Vikings really the first Europeans to settle North America? We know of one Viking site on the very northern tip of Newfoundland but was this part of a wider Viking territory?

‘It felt like Sarah’s team were making history, both in the high tech labs and on the ground in windswept Newfoundland, and I got to watch the entire process.’