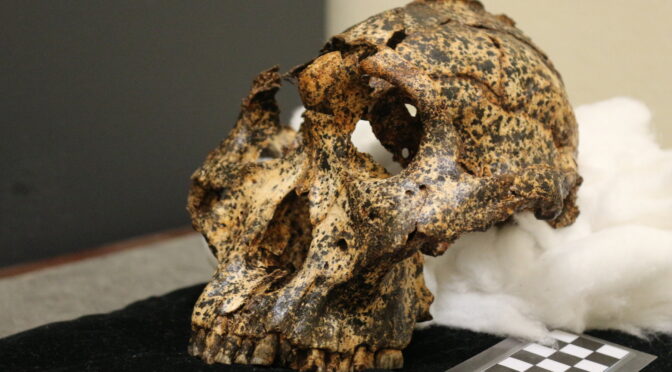 Fossil child skull from 2.2 million years ago reveals how humans out-smarted the other great apes – and the key is the soft heads of our babies

A fossil more than two million years old could help explain why man became so brainy.

The Taung fossil, an early hominid that was discovered in South Africa in 1924, was significant features that could shed light on the evolution of intelligence.

Importantly it has a ‘persistent metopic suture’ – an unfused seam – in the frontal bone, which allows a baby’s skull to be pliable in childbirth. In great apes, this closes shortly after birth but in humans, it doesn’t fuse until around two years of age – allowing brain growth.

The unfused seam allows babies to be born with larger brains, and the delay in fusing allows the brain to grow larger in early life, reports Proceedings of the National Academy of Sciences.

The Taung fossil has become the ‘type specimen,’ or main model, of the genus Australopithecus africanus.

An australopithecine is any species of the extinct genera Australopithecus or Paranthropus that lived in Africa, walked on two legs and had relatively small brains.

Dr Dean Falk, of Florida State University, said: ‘These findings are significant because they provide a highly plausible explanation as to why the hominin brain might grow larger and more complex.

‘The persistent metopic suture, an advanced trait, probably occurred in conjunction with refining the ability to walk on two legs.

‘The ability to walk upright caused an obstretric dilemma.

‘Childbirth became more difficult because the shape of the birth canal became constricted while the size of the brain increased. The persistent metopic suture contributes to an evolutionary solution to this dilemma.

‘The later fusion was also associated with the evolutionary expansion of the frontal lobes, which is evident from the endocasts of australopithecines such as Taung.’