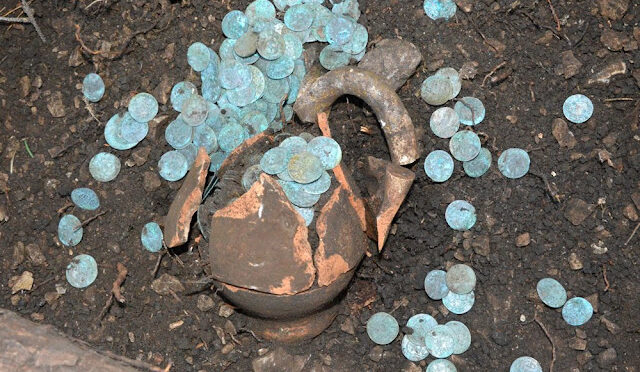 Archaeologists in Lučivná, a village under the Tatras, dug out a small earthenware jug with 870 pieces of silver coins.

“We cleaned two-thirds of the coins, so far the oldest one is from 1665 and the youngest from 1733. Hungarian mintage dominates but there are also Silesian, Tyrolean, Moravian, Lower-Austrian and mintage from the Olomouc archbishopric,” said archaeologists from the Archaeological Institute of Slovak Academy of Sciences in Spišská Nová Ves, Marián Soják, as quoted by the SITA newswire.

Archaeologists have researched systematically in Lučivná; in the past, they found unique discoveries from modern times, according to Soják.

“Some modern coin, spur or badge appeared here and there, however, this was a big surprise for us,” stated Soják for SITA.

The treasure was found in the western part of the cadastre.

“It was buried on a ridge above caves located about 15 metres from a group of rocks. The person knew where to bury it to be able to find it, even though he or she apparently did not come back,” the archaeologist noted for SITA. He added that it is hard to say what the circumstances were that led to burying the treasure.

“Maybe the person hid it because of disturbances, maybe he was attacked on a well-known postal road that leads through the village,” Soják continued for SITA.

The owner of the coins was a medium wealthy person, probably from the lower middle class.

“The nominal value is rather low; the highest value is 15 Kreutzer of Leopold I. Among all the silver coins is also a copper one, a mining emblem from Špania Dolina, that one is really precious,” the archaeologist summed up for SITA.