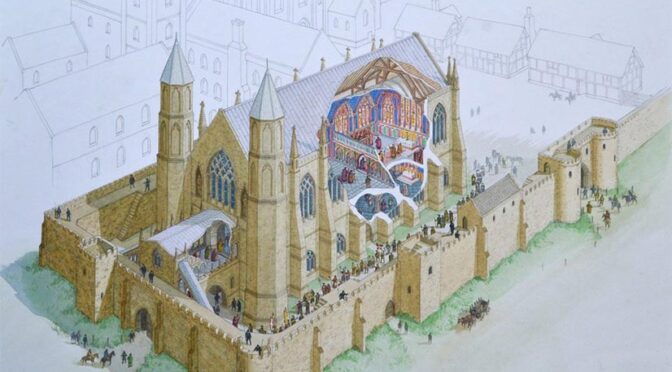 The ruins of an old medieval chapel, comparable to some of the greatest in Europe, have been uncovered at Auckland Castle in County Durham, North East England.

Historical documents show that a two-storey chapel, described as ‘sumptuously constructed’ and ‘exceedingly good,’ was built at Auckland Castle, Bishop Auckland in the early 1300s.

It was created for Bishop Antony Bek, (Prince Bishop of Durham 1284-1310), a great warrior and one of the most powerful and influential men in Europe at the time.

Despite it being larger than the king’s own chapel at Westminster, and with pieces of carved stone weighing the same as a small car, the exact location of the 14th-century chapel has remained a mystery since its destruction in the 1650s, following the English Civil War.

Now, following years of archaeological excavations, Bek’s Chapel has finally been discovered and the full extent of its spectacular scale will be revealed to the public in a special exhibition at Auckland Castle.

A new reconstruction image of the medieval building will be on display in the exhibition, alongside finds uncovered by archaeologists from Durham University and The Auckland Project, the charity that owns and manages Auckland Castle.

The foundations of Bek’s Chapel were found during digs over a five-month period, which revealed that the walls of the medieval chapel were 1.5m thick, 12m wide and 40m long internally.

Archaeologists also found huge bases for internal columns, the buttresses along the chapel’s sides and even part of the floor. And over 300 pieces of elaborately carved stone were excavated, from fragments the size of a fist up to those the weight of a small car.

The uncovered evidence suggests that the original chapel was a vast structure, reaching towards the size of continental chapels such as Sainte-Chapelle in Paris and featuring a timber ceiling and huge pillars with decorated stonework.

Archaeologists believe the chapel’s size, scale and decoration would have been a statement of the status of Bishop Bek, who as Prince Bishop of Durham held remarkable powers to mint coinage, raise armies and even rule on behalf of the king.

In the months following the discovery of the chapel, archaeologists from The Auckland Project and Durham University have been working with a panel of archaeological experts, including Architectural Historians Tim Tatton-Brown, Tim Ayers and John Crook, to create a reconstruction of Bek’s Chapel, as it would have looked in the 14th century.

The team mapped details from elements of comparable buildings, including kings’ chapels, cathedrals, and minsters, to suggest the kind of glasswork, carved stone and roof construction that would have featured in Bishop Bek’s original chapel.

Stuart Harrison, Archaeologist at York Minster, recorded the geometry of the discovered foundations and stonework to reconstruct the framework of the original building.

And illustrator, Andy Gammon combined the information with his own research to bring the Chapel to life through a colored reconstruction, with a cut-away opening up the chapel’s interior as well as an aerial view from the South West.

The team of archaeologists from The Auckland Project and Durham University will return to Auckland Castle this summer to continue their excavation of Bishop Bek’s Chapel where they are hoping to uncover more of the south side of the building.

And, some of the uncovered carved stonework will be on display for visitors to examine in an upcoming exhibition Inside Story: Conserving Auckland Castle at the Bishop Trevor Gallery at Auckland Castle.