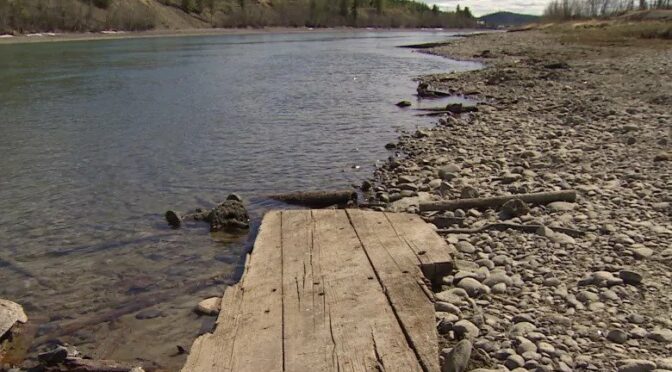 These days, take a walk along the Yukon River in Whitehorse and you may spot things you rarely see — historical objects and structures typically well hidden under water or ice.

“Like, here is a log cradle, or a crib, used to support sternwheelers when they were pulled out of the river in the winter,” archeologist Ty Heffner of the Yukon government said as he walked along the river bank.

Water in the Yukon River system is very low this spring. Vast gravel bars flank the stream in many areas, and Heffner says lots of artifacts can now be seen in the mud and rocks.

There were warehouses and wharves and all kinds of activity — and the historical evidence here just relates to that,” Heffner said.

“People can come down here and have a look at these items, and it just provides that tangible link to the past.” Murray Lundberg, an amateur historian in Whitehorse, says there’s a lot to see.

Most of what he calls the “good stuff” — things made of copper or brass — has likely been removed over the years, but there’s a lot of wood and steel all over the place.”

Anywhere there’s a calm spot, there’s a pretty impressive deposit of artifacts, still,” Lundberg said.”One of the problems we have right now is that nothing’s ever been cataloged because we’ve never seen the river this low — so it all has potentially significant historical interest.”

Lundberg says that’s why it’s best if people don’t pocket the things they find. “Collectors have done a lot of damage to sites like this — not just here, but everywhere,” he said.

According to Heffner, removing an object could also be an offense under Yukon’s Historic Resources Act.

“People, you know, might not really think about that or realize that these are protected heritage resources and that they should not take it away,” Heffner said.”These pieces of our heritage are best left where they currently are.”