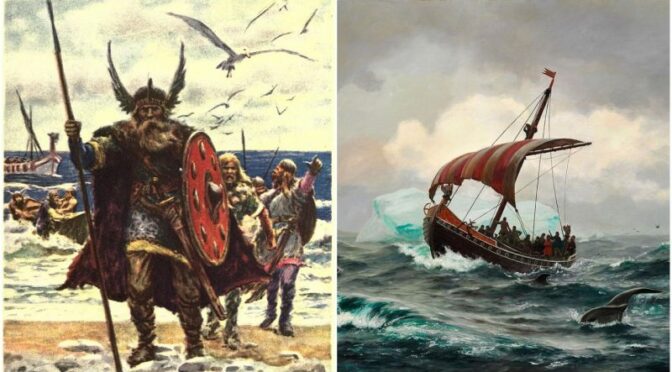 Did Vikings visit New Brunswick’s Miramichi and Chaleur Bay areas? According to the research done by Birgitta Wallace, senior archaeologist emerita with Parks Canada, they did.

“I’m really convinced that the Vikings did visit that area. Not all my colleagues would agree with me,” said the woman who’s been studying Vikings for 50 years.

While she is certain the Vikings did spend time in Miramichi and Chaleur Bay, she says she is not hopeful of ever finding anything to prove it.

Wallace said she determined that the second location that Vikings visited in North America, known as “Hóp,” meaning “tidal lagoon,” was in the Miramichi and Chaleur region after she studied the Vikings sagas. She also drew on her extensive work at L’Anse aux Meadows, located on the very northern tip of Newfoundland.

The sagas are contained in medieval documentation from Iceland that goes back to the oral history of the Vikings. They were not written down until 300 years after the actual events occurred, so Wallace said the oral telling of the stories may have changed a bit over time. “There are two separate manuscripts…that talk about voyages to what must be North America because it’s land west and south of Greenland.”

Wallace said while Vikings settled on Iceland and then Greenland, they continued exploring — either by accident or intentionally – to new lands. “These were people who just settled in Greenland in 985. They were immigrating there from Iceland.” Wallace said when voyages began between Norway or Iceland and Greenland, it was inevitable that someone would get blown off course. She believes this is how they found North America.

The archaeologist said there are two versions of the story. One talks about Leif Erikson retracing the watery path of one of these off-course trips, but it only talks about one settlement where he built a base camp and made four expeditions.

The other story features a different person and combines all the expeditions into one that go between two areas: “Hóp,” meaning “tidal lagoon,” a summer camp and a settlement further north described as being in fjord.

“After working a lot with the  L’Anse Meadows and what we found there, it’s really clear that L’Anse Meadows is base camp…it fits with everything,” said Wallace. “And from that camp… we know they went farther south and we know they must have gone as far south as eastern New Brunswick.”

Wallace believes those explorations were done through the Gulf of St. Lawrence, which would have led the Vikings to find the Miramichi and Chaleur regions. Wallace based her conclusions on the finding of pieces of wood, butternuts and butternut wood at the L’Anse Meadows camp.”And butternuts have never grown north of northeastern New Brunswick. They are not native to either P.E.I. or Nova Scotia, so New Brunswick is the closest location.”

Wallace said the descriptions in the sagas match that part of N.B. well. “It talks about sandbars outside the coast, rivers and wonderful hardwoods and not the least, wild grapes. And it so happens that butternuts grow in pretty much the same location as grapes and ripen at the same time,” she said.

“So, whoever picked those nuts would have seen those grapes.”

Wallace said the area would have been considered of great importance because it was called Vinland in the saga, which means wine land.”Vinland wasn’t one particular spot, it was land like Iceland and Greenland, a country or region.”

The archaeologist says she believes about 40 men would spend 3 months exploring the region, sleeping in structures built with turf with no permanent roofs, just a canvas-like material.”And to find anything like that after 1,000 years, people that were very anxious I’m sure to take all their tools and belongings with them back, it’s not very likely that we can ever find particular, physical evidence like we do have in L’Anse Meadows.”

But Wallace points out another strong indication the Vikings visited the area is found in the strong similarities of the descriptions in Leif Erikson’s saga and Jacques Cartier’s journal.

“It is exactly the same type of description.” Her belief is strengthened by the saga’s description of the Vikings encounters with most of the Indigenous inhabitants at “Hóp.” “That would fit this area very well,” she said.

“It would be the ancestors of Mi’kmaq and you have Red Bank, Metepenagiag which has been inhabited for 3,000 years or more.” Wallace is finding the sudden interest in this part of the story of the Vikings’ expedition humorous considering she’s been researching and writing about it for several years. She thinks an article she recently had published is the reason. “Somehow, it grabbed people’s attention,” she said with a laugh. “The interest in Vikings is astounding to me.”