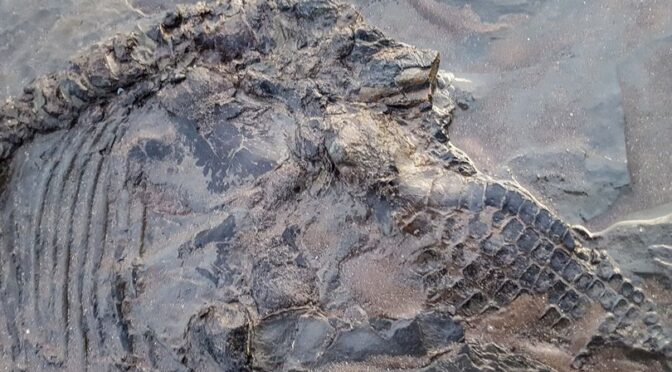 A dog walker was left stunned after his dogs accidentally discovered a 65 million-year-old dinosaur skeleton while walking on a beach. Jon Gopsill, 54, was walking his two dogs, Poppy and Sam on the coast of Stolford, Somerset when he stumbled across a bone that turned out to be part of a five-and-a-half foot-long fossil.

The skeleton – which Jon believes to be of a prehistoric ichthyosaur – was unearthed after a week of rough seas on the south coast.

The ichthyosaur was a prehistoric porpoise-like sea mammal that lived during the Jurassic period.

“I often go to the beach walking with my dogs and when the tide goes out we go out to the rocks because they like playing there,” said Jon, an amateur archaeologist.

“I have always been a bit of an amateur fossil hunter and I have found a good supply of ammonites, so I always keep my eyes open.

“I thought it was obviously a fossilised sea creature, possibly an ichthyosaur.

“It doesn’t have a head , I have looked around but I can’t find it.

“It has been there for at least 65 million years.

“I realised straight [away] that it was amazing, museum-quality stuff. As soon as I saw it I knew I found something special.

“I was just blown away to see it there. It really is incredible that is has survived for such a long time and is now just there for everyone to see.”

Jon, a psychiatric nurse, has attempted to contact both Somerset Heritage and the Natural History Museum to report the find – but is still waiting for a response.

Miraculously, Jon went out on another walk and this time, his cockapoo Poppy brought him back a stone that turned out to be a fossil too.

He added: “I couldn’t believe it, it’s stunning- I’ve taught her what fossils are but I didn’t expect her to bring me one.

“My wife says it was just luck- I think having had the stormy weather recently has washed a lot of mud out so the rocks were a little bit more exposed.”