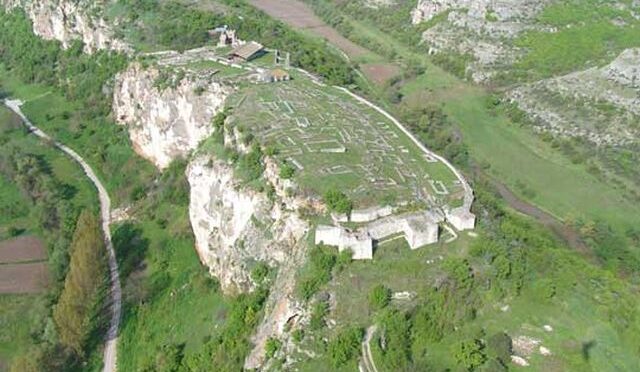 RUSE, BULGARIA—Archaeologist reports that a fourteenth-century Christian church decorated with murals has been discovered in northeastern Bulgaria’s medieval city of Cherven.

The church is the sixteenth to be uncovered in the Cherven Archaeological Preserve. Fragments of the frescoes include images of painted drapery and a scene depicting “warrior saints.”

Some of the murals have been transferred to a conservation laboratory, where they will be restored and placed on a reinforced surface for display at the Ruse Regional Museum of History.

The glorious medieval city of Cherven, in today’s Ruse District in Northeast Bulgaria, was one of the major urban, religious, and economic centers of the Second Bulgarian Empire (1185-1396/1422 AD). While Cherven was one of the largest urban centers in the Second Bulgarian Tsardom (Empire), it has a much longer history, as its area also features remains from an Ancient Thracian settlement, an early Byzantine fortress, as well as several settlements from the time of the First Bulgarian Empire (680-1018 AD).

During the period of the Second Bulgarian Empire (1185-1396 AD), and especially in the 14th century, Cherven became one of Bulgaria’s most important cities. It has been excavated since 1910, with early 20th century excavations being led by Vasil Zlatarski, one of the most renowned Bulgarian historians and archaeologists from the early years of the Third Bulgarian Tsardom formed after Bulgaria’s Liberation from the Ottoman Turkish Empire in 1878.

Up until recently, Cherven was known to have had a total of 15 churches, until the 16th one was exposed recently in the western part of the medieval city, the Regional Museum of History in the Danube city of Ruse has revealed. The Ruse Museum has announced that it has drafted a project for seeking funding from the Bulgarian Ministry of Culture for the conservation and restoration of the 14th-century murals.

“The full-fledged exposure of the church building led to the discovery of a preserved layer of murals on the temple’s walls,” the Museum says.

“The preserved fresco fragments are parts of a painted drapery as well as a partly preserved scene with figures of warrior saints,” it adds. The archaeologists and restorers have already put in place a cover over the surviving frescoes in the newly discovered Church No. 16 in Cherven, a major economic and spiritual center in the late Second Bulgarian Empire. The area of the surviving murals is about 12 square meters on the ruins of the walls of the church, which is dated, more specifically, to the first decades of the 14th century.

The late medieval church is described as one of the temples that are representative of the life of the medieval fortress of Cherven. The church has one apse pointed to the east, and is 13 meters long and 7 meters wide. Part of the discovered frescoes have been transferred to a restoration atelier, and the conservation and restoration project developed by archaeologist Svetlana Velikova is supposed to guarantee the reinforcing and restoring of the murals on a new surface.

The restoration work is being carried out by Assoc. Prof. Miglena Prashkova from Veliko Tarnovo University “St. Cyril and St. Methodius”.

“The successful realization of the project would lead to including the picturesque decorations from the newly found church [in Cherven] in the permanent exhibition of the Museum,” the Ruse Museum of History says. Parallel to the excavations of the church, the Ruse archaeologists have also been exposing a nearby necropolis as well as parts of a medieval street and adjacent buildings.

“Future research in this area would help clarify important questions about the urban planning [of the city of Cherven], and about the events around the conquest of the fortress [by the Ottoman Turks] and the ensuing Early Ottoman period,” the Ruse Museum states.

An interesting fact about Cherven is that so far the archaeologists have found a total of 80 medieval inscriptions about church donors there, more than in the capital of the Second Bulgarian Empire, Veliko Tarnovo, where a total of 60 such inscriptions have been found. This is seen as a testimony to Cherven’s importance during the Middle Ages.

The Cherven Archaeological Preserve is located within the Rusenski Lom Natural Park, along the canyon of the Cherni Lom River, in a truly magical and picturesque landscape. The ruins of the medieval Bulgarian city of Cherven are found on a high rock while today’s town of Cherven, which was set up by survivors after the Ottoman conquest, is located down in the river gorge.

The medieval Bulgarian city of Cherven was one of the most important urban centers in the Second Bulgarian Empire (1185-1396 AD). It is located in today’s Ivanovo Municipality, 35 km south of the Danube city of Ruse, on a rock overlooking the picturesque canyon of the Cherni Lom River, within the Rusenski Lom Natural Park. It experienced dynamic urban growth after Bulgaria’s liberation from the Byzantine Empire in 1185 AD, and rose to great importance during the 14th century.

A total of 80 medieval inscriptions about church donors have been there, more than in the capital of the Second Bulgarian Empire, Veliko Tarnovo, where a total of 60 such inscriptions have been found, a testimony to Cherven’s importance during the Middle Ages. It was a center of Christianity as the seat of the Cherven Metropolitan and a center of craftsmanship. Cherven was conquered and ransacked by the Ottoman Turks in 1388 AD.

After the Ottoman Turkish conquest, it briefly preserved some administrative functions but waned and essentially disappeared as an urban center. Some of its survivors settled nearby into the newly founded village of Cherven. Cherven was first excavated in 1910 by renowned Bulgarian historian and archaeologist Vasil Zlatarski. It has been regularly excavated since 1961. In the recent decades, it has been excavated by Stoyan Yordanov from the Ruse Regional Museum of History.

Archaeologists have discovered there a large feudal palace, fortified walls reaching up to 3 m in width, two well-preserved underground water supply passages, a total of 13 churches, administrative and residential buildings, workshops and streets.

A famous 12 m-high three-storey tower, known as the Cherven Tower, from the 14th century has also been fully preserved and was even used as a model for the reconstruction of Baldwin’s Tower in the Tsarevets Hill in Veliko Tarnovo in 1930.