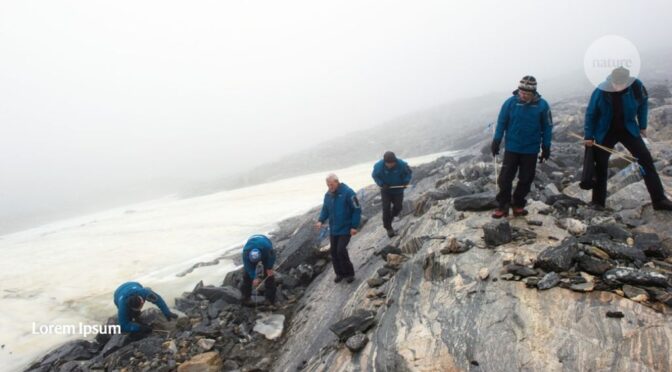 As the glaciers of Scanadvia melt, the long-forgotten journeys of intrepid Vikings are revealed.

Reported in the journal Antiquity today, a retreating Lendbreen glacier in the mountains of Norway has recently revealed a mountain pass used by Vikings over 1,000 years ago, along with a treasure trove of rare artifacts, weapons, and ancient horse poop.

The mountain pass was brought to light in 2011 when the receding Lendbreen ice patch revealed a stunningly well-preserved wool tunic from around 1,600 years ago.

While other archaeological digs have headed to these hills in the years following, a huge increase in melting on the glacier in 2019 revealed even more long-lost possessions that were carelessly dropped by Vikings centuries ago.

Archaeologists from the University of Cambridge in the UK and NTNU University Museum in Norway used radiocarbon dating on at least 60 artifacts from the site, suggesting the mountain pass was used by humans for over millennia, between 300 CE and 1500 CE.

This also indicated that the mountain pass was most widely used around 1000 CE during the Viking Age, a time in Scandinavian history when Norsemen expanded their influence across Europe and beyond through trade and a hefty dose of violence.

Among the glacier’s hidden loot the team discovered a knife with a preserved wooden handle, the remains of a shoe, a fur mitten, and a distaff used to spin natural fibers.

Many of the objects actually detail the journey of Vikings through the pass, including objects such as horseshoes, bones of horses, horse dung, remain of sleds, and a walking stick with a runic inscription.

“My favorite find from Lendbreen is a small wooden bit with pointed ends [pictured below]. When we found it, we could not understand what it was used for,” Lars Pilø, co-director Department of Cultural Heritage at Innlandet County Council, told IFLScience.

“It was exhibited at a local museum, and an elderly woman who visited the exhibition immediately identified it. It is a bit for goat kids and lambs to prevent them from suckling their mother, as the milk was used to produce dairy products on the summer farms,” Pilø explained.

“The women had herself seen such bits in use in the 1930s. They were made in Juniper then, and so is ours, but the bit from Lendbreen is radiocarbon-dated to the 11th century CE!”

Judging from the artifacts left here, it’s believed this passway was used to access high-elevation farms in the warm summer months and as a major trade route, whether for local use or even to transport rare pelts and antlers to the rest of Europe.

At some time around the 11th century CE, however, the journeys along this busy road dried up. In the centuries following 1000 CE, northern Europe was hit with a number of big social, economic, and climatic changes of fortune that saw the passageway become used less and less.

One of these big changes was the Black Death, which first struck Norway in 1348 or 1349, and caused more than its fair share of human misery and economic turmoil.

“It seems likely that the amount of mountain travel here declined and ultimately stopped as the Little Ice Age and then, in the middle of the 1300s, the Black Death, took their toll,” said Dr. James H Barrett, Reader in Medieval Archaeology at the University of Cambridge.

“The decline in population reduced demand for mountain products, and there were simply fewer travellers on the road. When population and the economy recovered, the pass had been forgotten and new routes were created.”