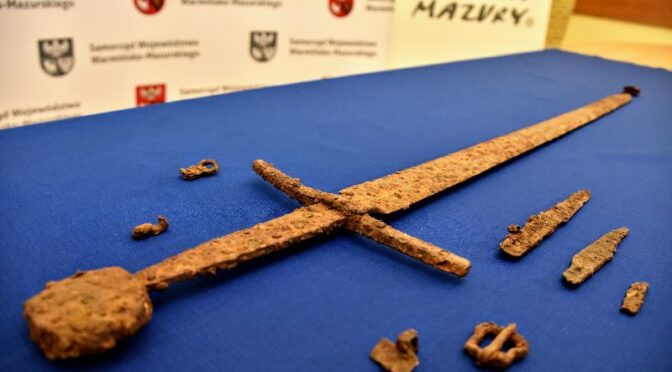 A medieval sword, metal pieces of a scabbard and a belt, and two knives that would have been worn on the belt were discovered in northern Poland by a metal detectorist who donated the artefacts to the Museum of the Battle of Grunwald, according to a Live Science report.

Alexander Medvedev discovered the sword near Olsztyn, in northern Poland, the local governmental Marshal’s Office of Warmia and Masuria reported in a translated news release on April 22.

“Such a find is found once in decades,” archaeologists said, according to the statement.

Despite spending more than 600 years buried underground, the weapons are well preserved, said Medvedev, an archaeology enthusiast, who donated the findings to the Museum of the Battle of Grunwald in Olsztyn.

According to Encyclopedia Britannica, the person who carried the sword might have been one of roughly 66,000 people who clashed at the Battle of Grunwald on July 15, 1410.

The battle fought near the Polish villages of Stębark (also known as Tannenberg), Grunwald and Ludwigsdorf, ended with a Polish-Lithuanian victory over the Knights of the Teutonic Order, which was founded during the Crusades to the Holy Land and later came to rule over what was then Prussia.

The Knights of the Teutonic Order often waged battles against their non-Christian neighbours, including the Duchy of Lithuania. But then, Lithuania’s pagan grand duke converted to Catholicism and married the Polish Queen Jadwiga; he became king when she died and took the name King Władysław II Jagiełło.

He later became known for uniting Poland and Lithuania during the region’s Golden Age, and even has a statue honouring him in New York City’s Central Park.

King Jagiełło also converted Lithuania to Christianity. But the Knights of the Teutonic Order doubted the sincerity of the king’s conversion, and in 1409, their Grand Master Ulrich von Jungingen declared war on Poland and Lithuania, according to Encyclopedia Britannica.

After a day of fighting, von Jungingen was killed when a lance pierced his throat and his troops withdrew. In all, of the 39,000 Polish-Lithuanian troops, about 5,000 died; of the roughly 27,000 Teutonic troops, 14,000 were captured and 8,000 died, according to Encyclopedia Britannica. After the defeat, the Teutonic Order’s power declined.

Hundreds of years later, the Soviets retrospectively claimed the battle as a Russian victory, because some soldiers from Smolensk, a city in Russia, were present on the Polish-Lithuanian side. During World War I, the Germans won a battle against Russia near the medieval battle site.

The Germans, who viewed the medieval knights as noblemen who spread Christianity, named the new battle the Battle of Tannenberg so they could claim revenge for the knights who were defeated in the medieval battle, according to Encyclopedia Britannica.

The newly discovered sword and its accessories are now undergoing conservation and analysis.

The team hopes to learn more about the “social status of a medieval sword owner, and we are curious to see what lies beneath the rust layer,” Szymon Drej, director of the Museum of the Battle of Grunwald, said in the statement.

“We will also examine the site of the excavation of the monument in more depth to get to know the situational context of its origin.” After all, It’s rare to find such valuable items from the Middle Ages buried underground, Drej said.