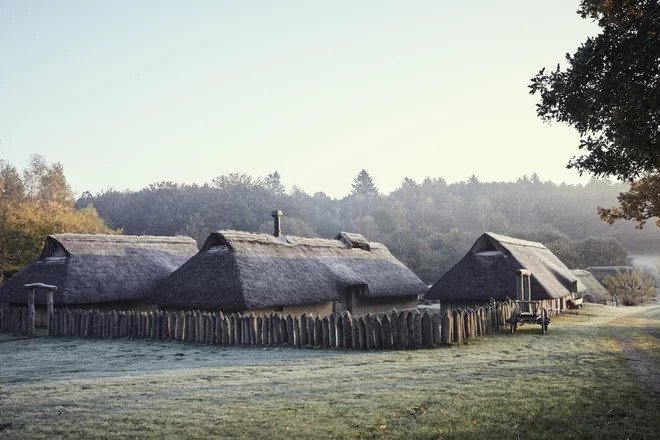 Traces of three courtyards surrounded by a ditch marks out an area, which archaeologists have interpreted as the center of a village dating back to the Middle Ages in Tollerup, East Denmark.

Historical sources suggest that the farms belonged to the village rulers. A cellar in the largest farm was probably used to store tax revenues in the form of objects collected from the villagers.

“The interesting thing about this find is that we have some very old written sources that [give us] an entirely new understanding from what we can interpret from the excavation alone,” says Gunvor Christiansen, an archaeologist at Roskilde Museum, Denmark.

The excavated farmhouses date back to the Late Middle Ages and the Renaissance (around 1400 to 1600 CE), and it is rare to find such well-preserved remains from this period, outside the large market towns in Denmark, says Christiansen.

Archaeologists do not know why the village was abandoned but they knew it existed as it is mentioned in a number of written sources.

A letter from King Canute IV first records the gifting of a village at this location to a bishop in 1085. The excavated houses were built later. A number of tax rolls from Tollerup also refer to six farms and a manor on the site, which was possibly used to store the collected taxes.

A gravel pit alongside the three farms could explain why they did not find the remains of the other three farms, says Christiansen.“Compared with other farms of the same period, we can see that one of the farms must have been the manor house, referred to in the written sources. It’s a qualified guess because the farm is so large,” she says.

The three farms are approximately five meters wide and 15 to 20 meters long, but the manor has a cellar area of 50 square meters. The foundations of the outer wall of the manor suggest that it was a two-story building.

The archaeologists were pleased to see that the cellar remains were buried so deep. This would have protected them from a disturbance at the surface, for example by farming equipment turning the land over the years.

It’s rare to find houses from the Middle Ages in Denmark, says archaeologist Nils Engberg, curator at the National Museum of Denmark.

“We have lots of excavations from earlier periods. For example from the Stone Age and Bronze Age. But unfortunately not from the Middle Ages because the houses were built in a different way,” he says.

It was at this time that people began to construct houses with stone foundations after a law was passed to prevent felling of trees. Previously, all houses were timber constructions which led to a timber shortage throughout the country.

But the remains of stone houses could be easily looted and the materials used elsewhere in subsequent buildings, meaning that few were preserved to this day.

Christianity had a foothold in the community

When in use, the cellars would have been full. Archaeologists found evidence of two grinding stones from a mill, plough equipment, and many more everyday objects.

Moreover, they found traces of clay flooring, an oven, and pieces of tile with religious motifs, including a priest.“Religious motifs were very typical of the 1500s,” says Christiansen. Engberg agrees.

This was when Christianity gained momentum, he says.“In this period we had a permanent royal power and a centralized administration.

The country was split into dioceses such as Roskilde and Lolland Falster diocese. Soon, a government formed and we begin to slowly see a societal structure similar to that of today,” he says.

Archaeologists suspect that the village fell under the Diocese of Roskilde.“The Bishop of Roskilde received the taxes during this period and he may well have rented the manor for a vassal to administer it.

In the end, all taxes from Tollerup went to the bishop up until the Reformation after which the king took control,” says Christensen.

It is not yet absolutely certain that the town is the disappeared village recorded in the old tax rolls and the king’s letters. Archaeologists and historians will continue to study the site to find out for sure.