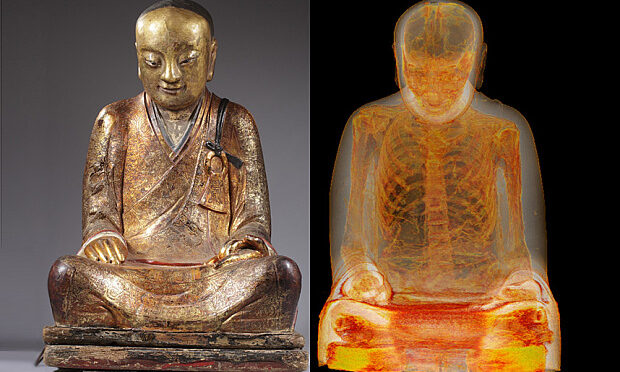 Scientific tests have revealed that an ancient Buddhist statue contains a 1,000-year – old mummified monk’s perfectly preserved remains in what is thought to be the only such example in the world.

The monk, who is sitting in the lotus position, is thought to have starved himself to death in an act of extreme spiritual devotion in China or Tibet in the 10th century. His preserved remains were displayed in his monastery.

Some 200 years later, perhaps after his remains started to deteriorate, his mummified body was placed inside the elaborate, lacquered statue of Buddha.

The unusual contents of the statue were discovered in the 1990s when the statue underwent restoration. Experts were unable to remove the mummy due to the risk of disintegration, so they could do little more than peer into the darkened cavity of the Buddha.

Now, an international team of German, Dutch and Italian scientists has conducted a CAT scan which revealed the monk’s skeleton in perfect detail.

“It was not uncommon for monks to practise self-mummification but to find a mummified monk inside a statue is really extraordinary,” said Wilfrid Rosendahl, a German palaeontologist who led the research.

“It’s the only known example in the world.”Using a CAT scan, we saw that there was a perfectly preserved body with skin and muscles inside the statue. It’s a complete mummy, not just a skeleton. He was aged between 30 and 50.”

The mummy has been studied by an interdisciplinary team of experts, including radio carbon dating specialists and textile analysts, at the Meander Medical Centre in Amersfoort, the Netherlands.

Using an endoscope, experts took samples from inside the mummy’s thoracic and abdominal cavities and discovered that the monk’s organs had been removed and replaced with ancient wads of paper printed with Chinese characters.

Samples of bone were also taken for DNA testing. The Buddha statue was bought several decades ago on the art market by a Dutch private collector, who had no idea that the mummy was hidden inside. It will go on display in museums around Europe, and is currently in the Natural History Museum in Budapest.” The monk died in a process of self-mummification,” said Dr. Rosendahl.

During the last weeks, he would have started eating less food and drinking only water. Eventually, he would have gone into a trance, stopped breathing and died.

He basically starved himself to death.”The other monks would have put him close to a fire to dry him out and put him on display in the monastery, we think somewhere in China or Tibet.”

He was probably sitting for 200 years in the monastery and the monks then realized that he needed a bit of support and preservation so they put him inside the statue.”Mummified monks were not only the focus of religious devotion but important for the economy of the monastery because they attracted pilgrims who would offer donations.