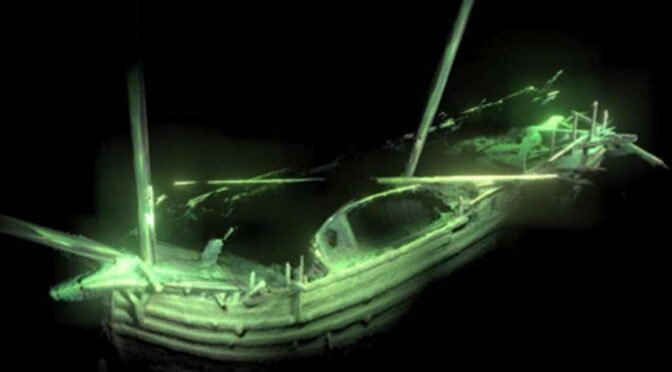 Beneath the frigid waters of the Baltic Sea, investigators have discovered perhaps the best-preserved ship from the Age of Discovery. It was found on the seafloor and it is almost intact. The researchers were amazed by the condition of the vessel, which is roughly 500 years old and this means that it is a very important find.

The ship has been detected at the bottom of the Baltic Sea in Swedish territorial waters and is possibly the best-preserved ship ever found from the Age of Discovery and the Renaissance. However, the origin and the identity of the ship and how it came to sink is something of a mystery.

The shipwreck was first detected by side-scan sonar during a project to lay down some gas pipes in 2009. However, it was only this year that the private Swedish marine exploration company MMT thoroughly investigated the site and established that it was an early modern ship. The project is led by Dr Rodrigo Pacheco-Ruiz.

MMT scanned the seabed with photo-imaging equipment and they established that the shipwreck was almost intact. According to the Independent, it was found at a “depth of around more than 131 yards (120 meters) some 100 miles (161 kilometres) south-east of Stockholm”. The experts from MMT deployed underwater robots with artificial intelligence (AI) to survey the shipwreck.

This was possible because of the support of graduates “from KTH Royal Institute of Technology in Stockholm” reports the Archaeology News Network. Marine archaeologists and students from the University of Southampton also collaborated on the project.

The international team found that the shipwreck’s “condition is pristine” reports the New York Times. Its hull is intact, and its mast is still standing, which still has some rigging. The ship’s tender boat, which was used to ferry the crew still remains sitting on the deck.

According to the Independent, “the bilge pump and elements of the rigging can be seen. The bowsprit and decorated transom stern are also clearly visible”. There are still some swivel guns and a small cannon on the bow.

The vessel on the seafloor measured about 52 feet (16 meters) long. The fantastic state of preservation is probably a result of the unique environment of the Baltic Sea. Science alert reports that “the cold, slightly salty, hypoxic waters of the Baltic Sea’s deeper waters” helped preserve the vessel. The anchor of the vessel was also found, and this was crucial in the dating of the shipwreck.

The team believes that the ship dates to the late 15th and early 16th century, this is the era of the Renaissance and the Age of Discovery. It comes from the time when Michelangelo and Leonardo Da Vinci were making their masterpieces and when Christopher Columbus and Vasco De Gama were exploring the seas.

Science alert quotes Pacheco-Ruiz as saying, “We know it’s the oldest shipwreck in the Baltic”. There is no other ship this old that is in such a pristine condition. Most shipwrecks have only timbers, this is the case with the battleship Mars that exploded during a battle in the Baltic in 1564.

Archaeology News Network reports that “It is rare to find a ship in such an astonishing condition that predates the larger and more powerful vessels involved in the later Northern Seven Year’s Wars (1563-1570)”. The vessel was possibly a forerunner of the much larger vessels that allowed the Swedes, Danes, and later the Dutch to dominate the Baltic Sea.

The identity of the ship is not yet known, and it may be hard to establish. This is because ships were rarely formally named in that era. The team has called it the “’Okänt Skeep’ Swedish for unknown ship” reports the New York Times.

Establishing the identity of the sunken vessel is a priority for the investigators. It appears that it was a merchant vessel because it does not have large cannons.

Did the Ancient Ship Sink in Battle?

Another aspect of the shipwreck that is mysterious is how it sank. It could have gone down in a storm, which was common at the time. The Independent reports that the ship’s “guns being in their ‘ready to fire’ positions” would indicate that it was involved in some battle or engagement, which may have resulted in its sinking.

This ship was probably built and designed in northern Europe. However, it was very similar to the ships used by Da Gama and Columbus on their historic voyages. The design of the vessel can help researchers to better understand the naval technologies that allowed Europeans in the Age of Discovery to sail around the globe.

The team will resume their investigation of the shipwreck next year. This project shows the value of private companies such as MMT collaborating with universities. The discovery and survey of the mysterious shipwreck in the Baltic is only the latest success for the company and the University of Southampton. In recent years they have identified some 65 wrecks, dating back to Classical times in the Black Sea.