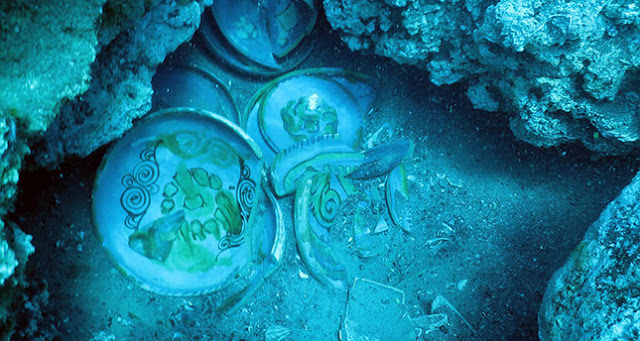 One of the world’s richest plate sets from the Eastern Roman Empire has been discovered off the coast of the southern province of Antalya’s Adrasan district.

“We were not hopeful of finding anything considerable,” said Selçuk University Archaeology Department academic Hakan Öniz. “Just then, we found a solid, very beautiful plate with its own colours. It made us very happy.

We were amazed by the designs on it. As we found the others, we were surprised by the motifs on each plate. There are fish and flower motifs unique to the era. The workmanship was very good. All of them were 800-900 years old.”

Among the most striking plates in the set are unique ones that are in the same design and colour but in different sizes. The ship that was carrying the plates is thought to have sunk after hitting a rock sometime in the 12th century.

The Byzantine Empire underwater excavations started in 2014 in collaboration with Dokuz Eylül University, Selçuk University and the Antalya Museum.

Öniz said the plates off Adrasan were scattered over an area of 15 to 20 meters.

“The ship was loaded with plates from two different plate factories. We don’t know where these factories are. I say two different factories because there are two different techniques used on the plates. We see that the plate set existed 900 years ago, too, and that women took care of their sets,” he said.

He said they had found the plates underwater on top of each other. Most of them were broken, while some had been taken by people, he added.

There are a number of other plates along the coasts of Antalya and Mersin, but many are too deep to retrieve, he said.

He said the ship carrying the plates had possibly been caught in a storm while en route. “The region where the ship wreckage was found looks like a harbour in which to shelter during storms. These harbours are called false harbours because when you look at these harbours, you would think they would protect you from the storm. The captain of the ship thought it was a safe place and anchored there, but even though the wind stopped, the current did not, and the ship hit a rock and was broken into pieces.”

‘We have not reached the ship’

Öniz said they had not yet reached the wood of the ship during the underwater excavations. “There is a type of worm called Teredo Navalis in the Mediterranean Sea. It eats the wood. If wood is close to the surface, this worm will eat it. For example, you can find all artefacts in the Baltic Sea in one piece because this worm does not live there, but it does in the Mediterranean.”

The academic said they had found an unbroken plate during work in 2014. “The plates on the surface were broken as if some people had used a hammer when trying to remove them from the rocks.

Largest one in the world

The plates that were discovered are exceedingly rare, Öniz said.

He said a plate set excavation had also been conducted underwater in Greece but the set in Adrasan was one of few rich plate set wreckages in the world.

He said 100 unbroken and 300 broken plates had been removed and highlighted the importance of the laboratory at the Antalya Museum.

“The materials like an amphora and ceramic plates have micro holes, and salt piles up in these holes. When the plate is left under direct sunlight, the salt swells and breaks the artefact. The plates removed from under the water will be cleaned from the salt over the next months and then become ready for display,” Öniz said.

He also said diving had been banned in the region of the wreckage 10 years ago by the Culture and Tourism Ministry. “It has been under protection for 10 years, but how can it be protected in a cove? Maybe some people came and dove here after this ban.”

The current excavations in the area are expected to finish next year.