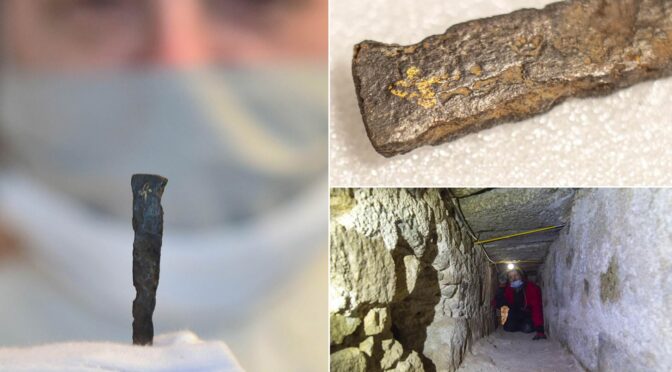 A secret chamber of a monastery has been discovered with priceless Christian relics, including a nail allegedly used in Jesus Christ’s crucifixion. Archaeologists working in the Czech Republic’s Milevsko monastery discovered a six-inch-long piece of the nail inside a box with a 21-karat gold cross.

The box was built between 260 and 416 AD and is inscribed with the letters ‘IR,’ which translates to ‘Jesus is King.’ The hidden treasury room, according to experts, was used to conceal rare artefacts from raids by Hussite troops in the early 15th century.

Researchers excavating the scene say that they cannot confirm if the nail came from the true Cross,’ but note the discovery ‘is even greater than the reliquary of St. Maurus, reports the Czech News Agency (ČTK).

The Maurus Reliquary is a large box made of gold that holds fragments from the bodies of three saints: Saint Maurus, Saint John the Baptist and Saint Timothy.

There have also been dozens of nails uncovered that are linked to Jesus’s crucifixion, leading scientists to be skeptical about the recent find.

Jiří Šindelář, who took part in the discovery, told ČTK: ‘Because the Hussites destroyed the archive, there was no information that such a thing was here.’

Šindelář added that the authenticity of the nail will be verified by other scientific expertise sometime next year.  Archaeologists have been working at the Milevsko monastery for several months and recently uncovered a secret passage that led to the treasury room.

The monastery was built in 1187 but was captured by Hussites in 1420 and taken over by the group’s nobility. However, before losing their place of worship, those who called the monastery home built a secret room to hide rare and priceless artefacts.

After analyzing the box through radiocarbon dating, the team found it was made with two types of wood. The larch wood, which is found in Israel’s subtropical climate, dates back between 1290 and 1394 AD.

The second sample, which is oak, was found to originate from 260 to 416 AD. A similar discovery was unearthed in October when a team found nails with ancient bone and wood embedded in them.

The nails were allegedly found in Jerusalem, in a first-century burial cave believed to be the resting place of Caiaphas, the Jewish priest who sent Jesus to his death in the Bible.

At some point after the cave was excavated in 1990, however, the nails went missing. Years later, filmmaker Simcha Jacobovici would claim to have found the nails, even claiming that they were used to crucify Jesus himself in the 2011 documentary, Nails Of The Cross.

He said: ‘The materials invading caves differ subtly from cave to cave depending on topography, soil composition in the area, the microclimate and neighbouring vegetation.

‘Our analysis clearly and unequivocally demonstrates that these materials are chemically and physically identical to those which have, over centuries, also become attached to the nails. Caiaphas’ cave was the only match for the nails out of 25 tombs tested, Dr Shimron found.

He continued: ‘We have also discovered fine slivers of wood accreted within the iron oxide rust of the nails.

‘It is well preserved and entirely petrified* the wood is therefore ancient and not a chance or man-made fake attachment to the nails. Within the rust and sediment attached to the nails, we also identified and photographed a number of microscopic fragments of bone.’