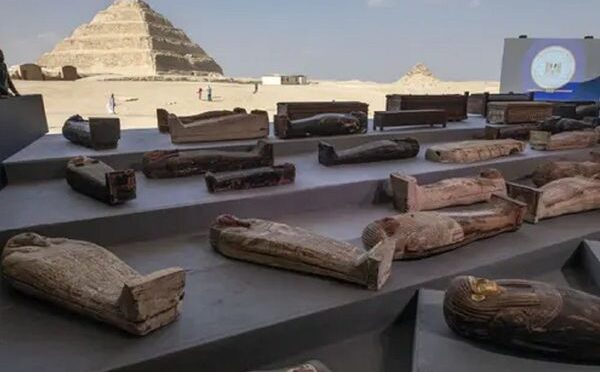 Nearly 100 coffins buried over 2,500 years ago found in Egypt

On 14 November, Egyptian antiquities officials declared the discovery. Some of the coffins had mummies inside them, the officials said.

Archaeologists discovered as many as 13 coffins from a burial ground in Egypt back in September that was believed to have been sealed for 2,500 years.

The large burial complex was buried deep in the desert necropolis of Saqqara, according to sources. The site is situated 30 km south of Cairo. Many scholars celebrated the finding because the coffins, which are considered to be over 2,500 years old, are well preserved.

About a few weeks later, the archaeologists unsealed one of the 2,500-year-old coffins in front of a live audience in Egypt. The mummy was wrapped in an ornate burial cloth, which had been decorated to resemble the deceased priest’s face.

According to a press release by Egypt’s Ministry of Tourism and Antiquities, initially, three burial wells at different depths between 10 and 12 metres, with 13 coffins, were discovered in Saqqara. Then another 14 coffins were revealed until the total number of coffins reached 59.

Now, another ancient haul of more than 100 coffins and around 40 glided statues have been unearthed for the first time in 2,500 years in Egypt.

According to reports, Egyptian antiquities officials announced the discovery on 14 November. The officials added that many of the coffins had mummies inside them.

The massive hail was found in a vast necropolis south of Cairo. Recently, they were opened for the first time since they were buried nearly 2,500 years ago.

The officials said the coffins belonged to top officials of the Late Period of the Ptolemaic period of ancient Egypt. The discovery was made as deep as 40 feet below the surface in three burial shafts.

The coffins and other recovered artefacts are now being displayed at a makeshift exhibition in Saqqara.

Like last month, an archaeologist opened one of the coffins to reveal a well-preserved mummy.

“Saqqara has yet to reveal all of its contents. It is a treasure.

Excavations are still underway. Whenever we empty a burial shaft of sarcophagi, we find an entrance to another,” Tourism and Antiquities Minister Khaled el-Anany said at the event.