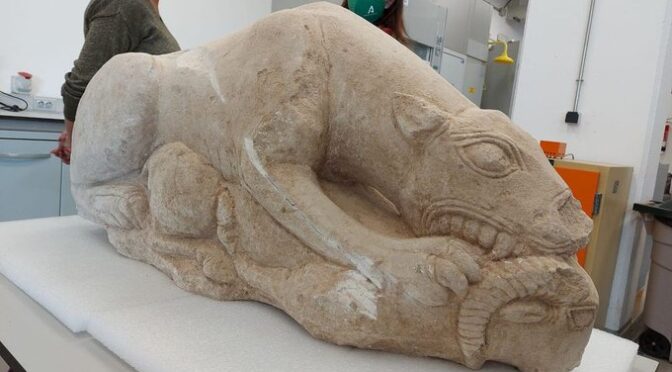 On a farm in Cañablanquilla, near San Sebastián de Los Ballesteros (Córdoba, Spain), farmer Gonzalo Crespo was working in the family olive grove when his tractor hit what he thought was a large stone.

When he stopped to inspect what it was he had hit, he was amazed to see a large statue of a lioness capturing her prey.

“I was doing a job and I noticed that the tractor had caught something harder than normal. I thought it was a stone, but when I got closer, I was surprised”, the farmer told Europa Press.

What was found is an archaeological piece of “great value” and around 2,400 years, according to a spokesperson for the Culture and Historical Heritage of the Junta de Andalucía, Cristina Casanueva.

The statue, carved in limestone, resembles a lioness or wolf attacking another animal.

It is thought to be from the year 4BC and remains in perfect condition.

The artefact was transferred to the Archaeological Museum of Cordoba where it will be examined by experts for Culture and Historical Heritage.

“It is necessary to evaluate its state, apparently well preserved, in order to establish future restoration procedures and an in-depth study that allows its enhancement”, said Casanueva.