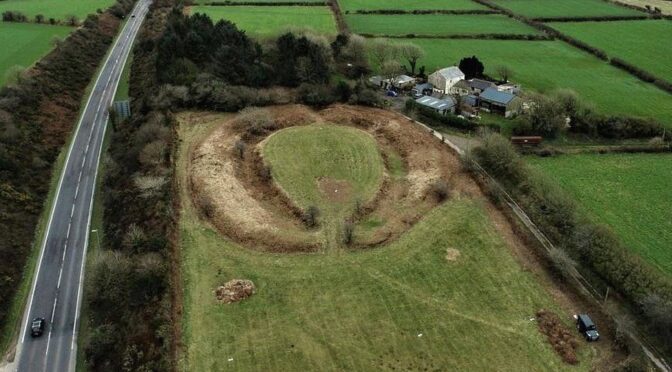 NEW research by Historic England and the Cornwall Archaeology Unit (CAU) has revealed a previously unknown stone circle inside Castilly Henge, near Bodmin.

The first modern archaeological surveys of Castilly Henge, which is located close to the A30 near the turn-off for Lanivet, have been carried out as part of a project to conserve and better understand the site.

Although many people will associate the term with the Stonehenge stone circle in Wiltshire, the word henge actually refers to a particular type of earthwork of the Neolithic period, typically consisting of a roughly circular or oval-shaped bank with an internal ditch surrounding a central flat area of more than 20 m (66 ft) in diameter. There is typically little if any evidence of occupation in a henge, although they may contain ritual structures such as stone circles, timber circles and coves.

Castilly Henge is believed to have been built during the late Neolithic period (c. 3,000 – 2,500 BC). Defined by an external bank and an internal ditch, it would have formed an amphitheatre-like setting for gatherings and ritual activities.

Previous researchers have suggested that the site was used as a theatre (‘Playing Place’ or plen-an-guary in the Cornish language) in the Middle Ages, and then as a battery during the English Civil War.

The opportunity to apply modern survey methods to this intriguing monument arose in 2021, when it was included in a Monument Management Scheme (MMS), a partnership between Historic England and the CAU to conserve and repair monuments on Historic England’s Heritage at Risk Register.

Volunteers coordinated by the CAU cleared the site of vegetation which threatened below-ground archaeological deposits. This work enabled teams from Historic England to carry out the first detailed topographic and geophysical surveys of Castilly Henge.

The surveys, which will be detailed in a Historic England report released later this year, revealed:

2. Detailed information about the henge’s original form and its modification over time.

Ann Preston-Jones, Heritage at Risk Project Officer at Historic England, said: “The research at Castilly Henge has given us a deeper understanding of the complexity of this site and its importance to Cornish history over thousands of years. It will help us make decisions about the way the monument is managed and presented, so that it can be enjoyed by generations to come.”

Peter Dudley, Senior Archaeologist at Cornwall Archaeological Unit, said: “The help of the local volunteers has been invaluable in removing the bracken and scrub obscuring the henge.

Over the winter, thirteen people gave 111 hours of their time and now the monument is looking so much better. The project has also re-fenced the field and the farmer is happy to start grazing again, improving the long term management of this amazing archaeological site.”

Castilly Henge is on Historic England’s Heritage at Risk Register because its location makes it difficult to look after, and as a result the earthworks and part of the interior were heavily overgrown with bracken.

As part of the MMS, volunteers have removed the bracken and other damaging vegetation from the monument, making it visible in the landscape again. The site has now been fenced, allowing it to be grazed.

Castilly Henge is protected as a scheduled monument. This late Neolithic henge monument is located at the centre of Cornwall, overlooking a major junction on the A30 trunk road with the A391 to St Austell and A389 to Bodmin.