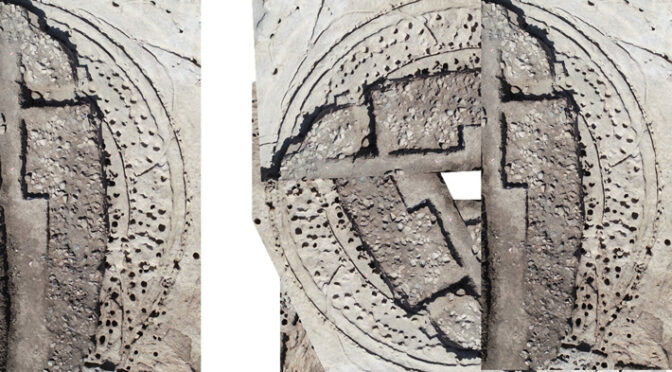 The 4,500-year-old ring of large ‘ shafts ‘ has been uncovered by archaeologists in the great Durrington Walls and the famous site at Woodhenge, just a few kilometers from Stonehenge, in southern Britain.

The newly-discovered circle is over 2 km in diameter and has been carbon-dated to 2500 BC.

The archaeologists identified up to 20 shafts — which are up to 10 m across and at least 5 m deep — but estimate there may have been more than 30 originally.

“The size of the shafts and circuit surrounding Durrington Walls is without precedent within the UK,” said Professor Vince Gaffney, a researcher in the School of Archaeological and Forensic Sciences at the University of Bradford.

“It demonstrates the significance of Durrington Walls Henge, the complexity of the monumental structures within the Stonehenge landscape, and the capacity and desire of Neolithic communities to record their cosmological belief systems in ways, and at a scale, that we had never previously anticipated.”

The scientists think the ring of shafts marks a boundary around the massive henge at Durrington. The features, along with an internal post line, could have guided people towards the religious sites and warned others not to cross the boundary.

“It was extraordinary such a major find had been made so close to Stonehenge,” Professor Gaffney said.

“They are not only clearly visible in the geophysical data sets, but the survey also provides the opportunity to place these features within a wider context comprising the many monuments associated with Stonehenge including the super-henge at Durrington Walls, just 3 km north-east from the iconic stone circle.”

“The Stonehenge landscape stands apart, not only as one of the most important archaeological landscapes in the world but also amongst the best studied,” said Dr. Eamonn Baldwin, an archaeologist at the University of Birmingham.

“To make such a major discovery within such an area is remarkable, and a testament to how archaeologists have begun to integrate technology with traditional research methods including excavation and aerial photographic survey.”

“After centuries of study of the Stonehenge landscape, the discovery of such an incredible new monument is testament to the value of interdisciplinary research,” said Professor Henry Chapman, an archaeologist at the University of Birmingham.

“Our understanding of this outstanding place has been transformed in recent years, and the identification of such a significant and extensive new site highlights that there is always something more to discover.”

“We’re tremendously excited at the prospect of applying ancient sedimentary DNA technology to these mysterious structures to discover their purpose in ancient Britain,” said Professor Robin Allaby, a researcher at the University of Warwick.