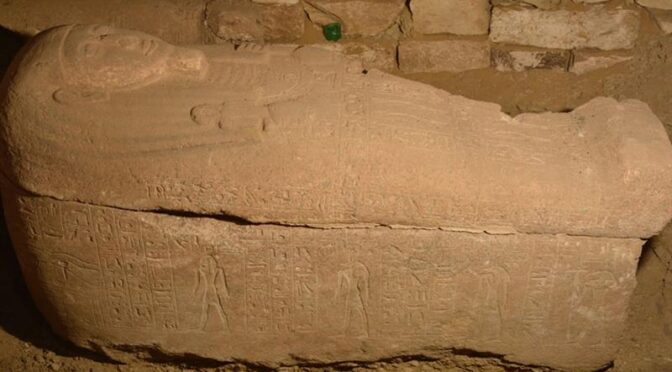 To the south of the causeway of King Unas in Saqqara necropolis, the archaeological mission of the Faculty of Archaeology, Cairo University, headed by Ola El-Aguizy, stumbled upon the sarcophagus of Ptahemwia from the reign of King Ramses II, whose tomb was discovered last year in Saqqara.

Mostafa Waziry, secretary-general of the Supreme Council of Antiquities, said Ptahemwia holds several titles, including the royal scribe, the great overseer of the cattle in the temple of Ramses II, the head of the treasury, and the one responsible for the offerings of all gods of Lower and Upper Egypt.

Waziri said the entrance to the shaft of the tomb at the centre of the peristyle court measured 2.2 X 2.1 m. The subterranean burial chamber opened on the west side of the shaft at the depth of 7 m.

It led to a square room measuring 4.2 X 4.5 m, leading to two other rooms on the western and the southern sides.

These two rooms were completely empty. In the main room, he added, a cut in the floor on the north side was noticed, leading to stairs that led to the burial chamber proper which measured 4.6 X 3.7 m.

El-Aguizy explained that the sarcophagus was uncovered on the west side of the burial chamber. It was directed south-north with an anthropoid lid showing the facial features of the deceased with crossed arms on the chest holding the Djed symbol of the deity Osiris and the Tyet symbol of the goddess Isis.

The sarcophagus is decorated with the usual inscriptions found on New Kingdom sarcophagi, with the bearded head of the owner, the sky-goddess Nut seated on the chest extending her wings.