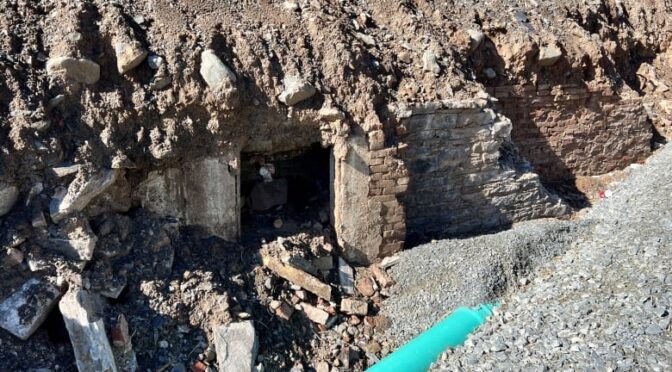 When digging began on the Cogswell Interchange project near downtown Halifax, some unique discoveries were bound to be found. The British established the Town of Halifax in 1749 and that history resurfaces from time to time. Recent excavations to add a new detour road in the area revealed a small part of daily colonial life.

“It was discovered at the time of us finding an old building foundation made of brick and stone,” said Donna Davis, project manager with the Cogswell District project.

“Basically it is a cavity that was used to store coal, so it’s called a coal chute or coal port.”

Davis said coal chutes were common in the 1800s to provide heating fuel and it’s believed coal was dumped into the chute through a grate at road level.

“We don’t know if the building would have been residential, commercial or industrial,” said Davis. “There were a mix of buildings in that area and our archeologist is continuing to find out more about the structure and what its origins might have been.”

It’s believed the coal chute would have been built in the mid- to late-1800s.

Davis said there are old maps that show the area near the Halifax waterfront was populated with numerous industrial and commercial structures in that era and some residential properties, too.

The work on the Cogswell Interchange is still in its infancy as the expected completion date is still four years away. Davis said there will likely be more interesting discoveries to come.

“When we come across something like that, construction stops and we have the archeologist come in to tell us what we’ve uncovered and to tell us how to proceed,” said Davis. “In most cases, we have to properly catalog what it is that we’ve found.”

A new construction project app will be rolled out this fall where pictures and information on the discoveries will be shared with the public.

The Cogswell Interchange was built in the late 1960s to early 1970s and officially opened in 1972.

Much of the interchange is being demolished to make way for a new Cogswell District neighbourhood, connecting Halifax’s downtown and waterfront with the north end. It will convert the existing road infrastructure into a mixed-use neighbourhood.