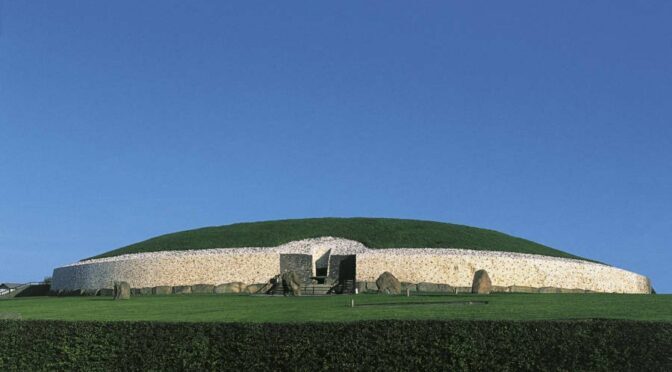 Newgrange: The Massive Irish Tomb That’s Older Than The Pyramids

Yep, 5,000 years. That’s older than Stonehenge. It’s older than the great Egyptian pyramids, too. And five millennia later, it hasn’t lost any of its wonders.

The massive hemispherical tomb is located in the Brú na Bóinne – Gaelic for the “palace” or “mansion” of the River Boyne. This 3-square mile area contains nearly a hundred ancient monuments, including two other large tombs, in addition, Newgrange, Knowth and Dowth.

Arriving at the iconic tomb is a wow-moment, to say the least. Standing outside the 80-meter mound, shored up with spiral-engraved kerbstones and topped with white Wicklow quartzite, a guide reveals the myths and history behind the monument. Newgrange could have been designed as a tomb or a temple – in reality, nobody knows which. The truth will be shrouded in mystery forever.

Let there be light…

Once the scene has been set for you as a visitor, you’ll step inside the passage tomb itself, squeezing through standing stones carved with spiraling rock art and graffiti dating back to the 1800s (before Newgrange was taken into State care).

Ducking under beams of wood, you’ll emerge into the cool confines of a cruciform-shaped chamber like a stony igloo squirreled away within a hill.

This inner sanctum is where a lucky few (chosen by lottery from thousands of applicants annually) huddle together to witness the annual winter solstice illumination.

At this moment, when megalithic engineering and nature lock sensationally into sync, a shaft of light can be seen snaking 19 meters up the passageway, ultimately bathing the chamber in light. There are goosebumps, to say the least…

If you’re not one of the lucky ones, don’t fret. All visitors are treated to a simulated solstice, with an orange beam of light artificially showcasing the effect. It’s a tantalizing little taster – little wonder legend suggests that this was the site where mythological hero Cú Chulainn was Born.

Not far away, near Oldcastle, County Meath, you’ll find a lesser-known cluster of passage tombs. Spotted around a handful of hills at Loughcrew are several cairns also dating from around 3,200BC. Because they’re more obscure and harder to get to, the Indiana Jones effect is all the more titillating.

If you get the sense that you’re being watched here, you may well be right. Some 60km away, atop of Slieve Gillian in County Armagh, the passage of another tomb points directly back towards Loughcrew.

Slieve Gillian’s two cairns lie on either side of a summit lake, with the southern tomb said to have a winter solstice alignment at sunset. On a good day, the views stretch as far as Dublin Bay.