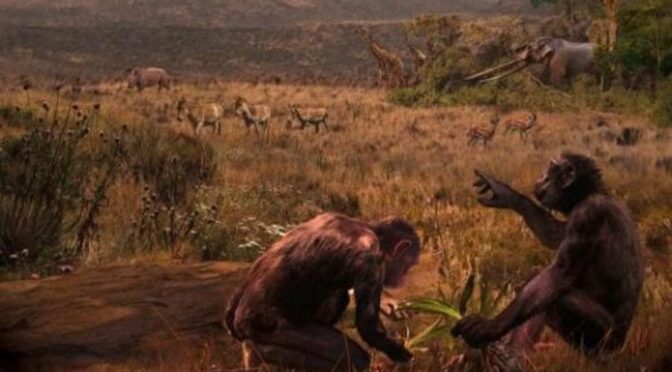 For 200,000 years on earth has been Homo sapien, give or take a few ten-thousand-year stretches. Much of that time is shrouded in the fog of prehistory.

Everything we know has been assembled into the principles of evolutionary theory by deciphering fossil record. Nonetheless, new discoveries have the ability to refresh their information and bring researchers to new results that have not yet been considered.

This may just have happened a set of 8 million years old teeth. The upper and lower jaw of an ancient European ape was recently examined by scientists.

Their findings suggest that the forebears of mankind may have originated in Europe before migrating to Africa, potentially upending a scientific consensus that has stood since Darwin’s day.

As reported in New Scientist, the 8- to 9-million-year-old hominin jawbones were found at Nikiti, northern Greece, in the ’90s.

Scientists originally pegged the chompers as belonging to a member of Ouranopithecus, a genus of an extinct Eurasian ape.

David Begun, an anthropologist at the University of Toronto, and his team recently reexamined the jawbones.

They argue that the original identification was incorrect. Based on the fossil’s hominin-like canines and premolar roots, they identify that the ape belongs to a previously unknown proto-hominin.

The researchers hypothesize that these proto-hominins were the evolutionary ancestors of another European great ape Graecopithecus, which the same team tentatively identified as an early hominin in 2017.

Graecopithecus lived in south-east Europe 7.2 million years ago. If the premise is correct, these hominins would have migrated to Africa 7 million years ago, after undergoing much of their evolutionary development in Europe.

Begun points out that south-east Europe was once occupied by the ancestors of animals like the giraffe and rhino, too.

“It’s widely agreed that this was the found fauna of most of what we see in Africa today,” he told New Scientists. “If the antelopes and giraffes could get into Africa 7 million years ago, why not the apes?”

He recently outlined this idea at a conference of the American Association of Physical Anthropologists.

It’s worth noting that Begun has made similar hypotheses before. Writing for the Journal of Human Evolution in 2002, Begun and Elmar Heizmann of the Natural history Museum of Stuttgart discussed a great ape fossil found in Germany that they argued could be the ancestor (broadly speaking) of all living great apes and humans.

“It suggests that the great ape and human lineage first appeared in Eurasia and not in Africa.”