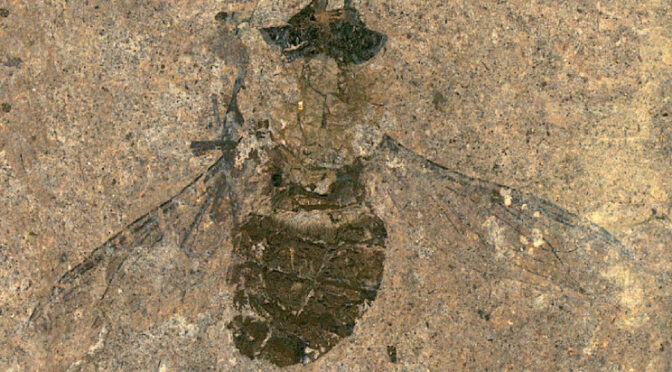 When scientists investigated a 47-million-year-old fossilized fly found at the Messel Pit fossil site in Germany, they noticed it looked a bit chonky. So they took a closer look at its “bulging abdomen” and discovered it was stuffed with pollen from different plants.

“The rich pollen content we discovered in the fly’s stomach suggests that flies were already feeding and transporting pollen 47 million years ago and shows it played an important role in the pollen dispersal of several plant taxa,” said paleobotanist Fridgeir Grimsson in a University of Vienna statement Thursday.

Grimsson is a co-author of a paper on the fly published in the journal Current Biology on Wednesday. The researcher suggested that flies of the time period may have outshined bees as pollinators.

The team was able to extract and study the fossil pollen grains and traced them mostly to water willow and virgin ivy plants. Electron microscope images helped to identify the origin of the pollen.

The plant types suggest the fly was feeding around an area of shallow water.

The Messel Pit in Germany is listed on the UNESCO list of world heritage sites as “the richest site in the world for understanding the living environment of the Eocene, between 57 million and 36 million years ago.”

The area was once home to an oil shale mine, but now it’s the subject of scientific study for the many well-preserved fossils of mammals and other animals.

Flies may be considered a modern-day nuisance, but this fossilized fly and its big appetite show they can also be useful emissaries from the deep past.