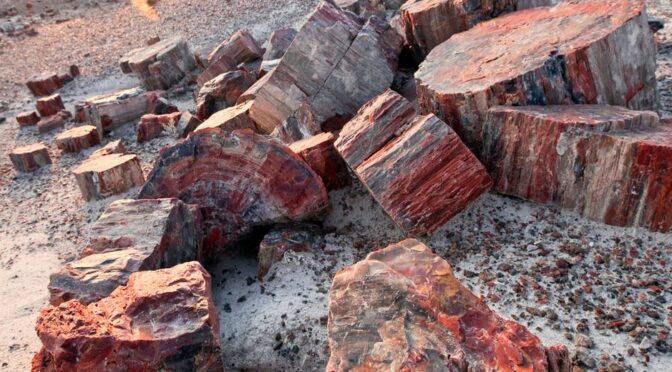 We’re going to the southwestern state of Arizona on our National Parks trip this week. We’ll find a strange and vivid landscape there. The hilly soil is covered by black, red, and sometimes purple rocks and sand. In odd forms, massive bits of ancient trees curl.

The area is the only national park that includes a part of the historic U.S. Route 66.

The word “forest” may mislead visitors. The park is in a desert. And the word “petrified” — which can mean “afraid”– may scare visitors away!

But fear not. “Petrified Forest” gets its name from the trees that have, over millions of years, turned to stone. That natural process is called fossilization.

Much of the Petrified Forest formed from tall trees called conifers. They grew over 200 million years ago near waterways. During floods, water forced the trees to be pulled up from the ground. Over time, the wood from the trees became petrified. The Petrified Forest National Park is one of the wonders of Arizona. It sits within the Painted Desert.

A Spanish explorer in the 1500s gave the place its name. It is easy to see why. The desert looks like an artist’s canvas. Brilliantly coloured mudstones and clays cover the land as far as the eye can see. They contain bentonite, a clay that is the product of changed volcanic ash.

Evidence of humans in the Petrified Forest dates back 13,000 years.

In the 900s, people in the area began building above-ground houses, called pueblos. They also made pottery for cooking and other uses. Scientists today find evidence of early pottery and pueblo homes all over Petrified Forest National Park. A long and severe drought in the early 1400s forced most of the people living here to move. But new groups soon arrived.

European explorers came in the 1500s. By the 1800s, American pioneers began settling in the area. And, by the 1920s, American motorists were travelling on U.S. Route 66. The road winds through the heart of the Painted Desert.

Long before humans entered the area, though, dinosaurs dominated. Petrified Forest National Park is a world-class area for fossil research. The fossil record at the park preserves some of the earliest dinosaurs. The dinosaur fossils are from the Late Triassic period, called the “dawn of the dinosaurs.” They help scientists reconstruct ancient environments.

The land here was set aside as a national monument in 1906. Congress moved to protect it because of its unique ecosystem, a record of human history and dramatic southwestern scenery. It became a national park in 1962.

More than 800,000 people visit the Petrified Forest National Park each year. The best way to explore the park is by foot. The National Park Service maintains many kilometres of walking trails.

The Crystal Forest trail is a one-kilometre path. It is named for the crystals that can be seen on the pieces of petrified wood. The trail is one of the best chances to see this fossilized wood up close.

The Petrified Forest includes many shapes and sizes of wood, from large logs to stumps to the smallest remains of plants. Most of the petrified wood found in the park is made up of quartz. Quartz is a hard, colourless mineral. The wood sometimes shines in the sunlight as if covered by glitter.

The Painted Desert Rim trail offers visitors a good chance to see the park’s wildlife. Lizards and rabbits are common. So are snakes and foxes.

Early morning or evening are the best times to see animals. These are also the times when the sun makes the Painted Desert the most colourful and spectacular.