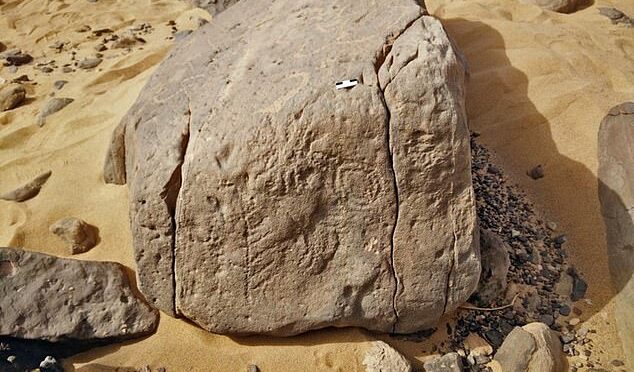 Wadi Al-Malik is the bed of an extinct river in Sudan that is rarely explored by archaeologists, but a recent dig has uncovered an incredible discovery – the world’s oldest ‘place-name sign.’

A team with the University of Bonn deciphered four hieroglyphs carved more than 5,000 years ago on a large stone that read ‘Domain of the Horus King Scorpion.’

What makes this inscription unique is the circular symbol toward the top right that indicates the rock was a marking of a ruler’s territory.

Archaeologists note that such writings in a remote area were unusual for those living in the fourth millennium BC, but it highlights the process of internal colonization in the Nile River.

Egyptologist Prof. Dr Ludwig D. Morenz from the University of Bonn, said: ‘This ruler called ‘Scorpion’ was a prominent figure in the phase of the emergence of the first territorial state in world history.’

Morenz continued to explain that Scorpion lived around 3070BC, but the team has yet to determine the dates and length of his reign.

He told DailyMail.com in an email: ‘Around 3100 there started something completely new in the Nile Valley: the first territorial state (one political power reigning of a territory of more than 800km north-south).’

‘The ‘Scorpion’ I am talking about played an important role in this process (as the first territorial state in world history I think it is of high importance even for our understanding of ‘global history’).’

‘Furthermore, I think that with our findings in Wadi el-Malik we can get a better understanding of the internal socio-economic development of Egypt a bit more than 5000 years ago.’

The name ‘Scorpion’ is written together with three other hieroglyphs on a rock inscription discovered more than two years ago in Wadi Abu Subeira to the east of Aswan.

The team from the University of Boon collaborated with the Egyptian Ministry of Antiquities when the stone was discovered two years ago, with the hopes of deciphering the ancient drawings.

The name ‘Scorpion’ is written by what looks like the predatory arachnids, along with two other images. But in the top right corner is a circular design that reveals that stone is a place name sign.

‘This is precisely why the new discovery of the rock inscription is so valuable,’ Morenz said.

‘Despite its brevity, the inscription opens a window into the world of the emergence of the Egyptian state and the culture associated with it.’

The researchers explain that Egypt was the first territorial state worldwide. There were already ruling systems elsewhere before, but these were much smaller,’ said Morenz.

However, during this time it was popularly known that the north-south extension of Egypt was already nearly 500 miles.

In fact, several rival population centres merged into the new central state,’ says Morenz. Royal estates, known as domains, were founded on the periphery of the empire in order to consolidate the pharaonic empire.’

In addition to various rock carvings, other early rock inscriptions were discovered here and found together with pottery from this period.

‘This area is still in the early stages of archaeological investigation,’ says Morenz.  The researchers see this as an opportunity to take a closer look at the momentous process of the world’s first state emergence.