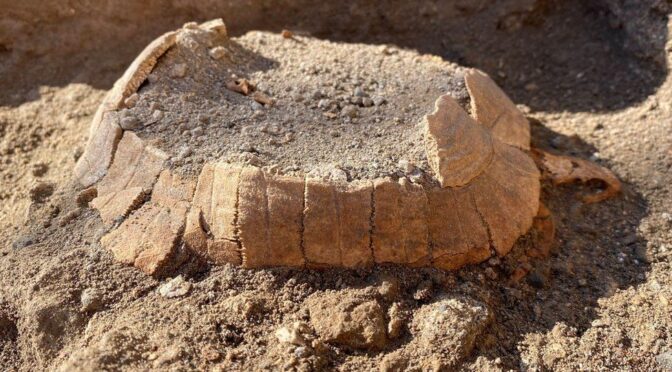 When Mount Vesuvius erupted nearly 2,000 years ago Pompeii’s ancient residents were frozen in place by ash. So too it turns out we’re the city’s flora and fauna – including a pregnant tortoise with her egg.

Archaeologists found the reptile’s remains buried under ash and rock where it had laid undiscovered since 79AD. The tortoise was sheltering beneath an already-destroyed building when volcanic disaster struck.

Archaeologists found the remains while excavating an area of the city that its ancient inhabitants had been rebuilding after an earlier earthquake devastated Pompeii in 62AD.

Around 2,000 years ago the 14cm (5.5in) tortoise had burrowed into a tiny underground lair beneath a shop destroyed in that earlier quake.

Experts say the fact it was found with an egg suggests it was killed while trying to find somewhere peaceful to lay its offspring.

Oxford University archaeologist Mark Robinson, who discovered the remains of another tortoise at a nearby Pompeii site in 2002, told the BBC there were two explanations for how the reptile had gotten there.

“One is that it is a pet tortoise that possibly escaped and made its way onto what were the ruins of the great earthquake,” he said.

A likelier possibility is that it was a tortoise from the nearby countryside that had wandered into the ancient city, he said.

“Pompeii was substantially wrecked and not everywhere could be rebuilt after the earthquake. The flora and fauna from the surrounding countryside had moved into the town.”

Experts say the discovery illustrates the richness of Pompeii’s natural ecosystem in the period after the earthquake.

“The whole city was a construction site, and evidently some spaces were so unused that wild animals could roam, enter and try to lay their eggs,” said Pompeii’s director-general, Gabriel Zuchtriegel.

One visitor to Pompeii, a Finnish PhD student who happened to be passing by the site when the discovery was made, described what he saw to the BBC as “spectacular.”

“They had just removed the shell of the animal, so what was visible was the skeleton and the egg,” Joonas Vanhala said. “It was a light-brown, sandy colour.”

“I wouldn’t have recognised it as an egg if they hadn’t told me,” he added.