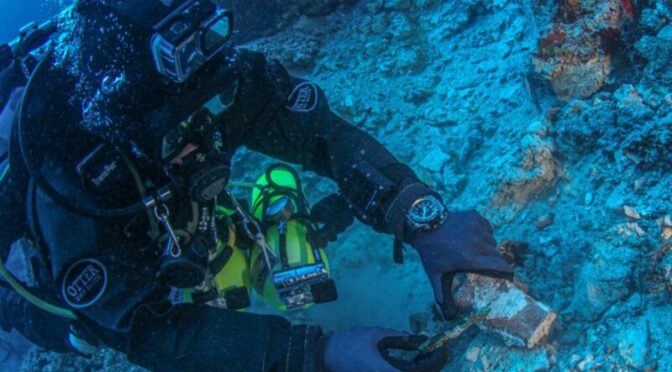 The so-called Antikythera mechanism, recovered from the wreckage of an ancient cargo ship off the coast of Antikythera Island in Greece, might be the world’s oldest analogue computer. The mystery surrounding its purpose and origin continues to fascinate scientists and enthusiasts alike to this day. But it’s not the only treasure salvaged from that Antikythera wreck.

An ongoing underwater archaeological project most recently recovered a large marble head of a bearded male figure believed to be part of a statue of Hercules. Divers also recovered a marble plinth with the lower legs of another statue, two human teeth, and several pieces of the cargo ship’s equipment.

As we’ve previously reported, in 1900, a Greek sponge diver named Elias Stadiatis discovered the wreck, which was apparently surrounded by rotting corpses on the sea floor. The captain, Dimitrios Kondos, didn’t believe Elias at first and thought the nitrogen in his breathing mix had affected the diver’s senses. So Kondos dove down to the site himself, emerging with an arm from a bronze statue.

Kondos and his crew had recovered all kinds of artefacts from the shipwreck by mid-1901, including 36 marble sculptures (representing Hercules, Ulysses, Diomedes, Hermes, and Apollo, among others); a bronze statue dubbed “The Philosopher” (circa 340 BCE); a bronze lyre; pieces of glasswork; and three marble horse statues. Along with the Antikythera mechanism, these precious artefacts are now housed in the National Archaeological Museum of Athens.

The salvage work ended that summer, however, after one diver died and two others were paralyzed from decompression sickness. No further attempt was made to excavate the treasures of the Antikythera wreck until famed explorer Jacques-Yves Cousteau visited the site in 1953. Twenty-three years later, Cousteau returned and worked with archaeologists to recover nearly 300 more artefacts. They dredged a section of the wreck to reveal artifacts previously hidden from view.

The wreck was left alone again for nearly 40 years until a Woods Hole Oceanographic Institute (WHOI) marine archaeologist named Brendan Foley (now at Lund University in Sweden) got permission from the Greek government in 2012 to undertake a complete diving survey of the wreckage site. As a bonus, they found a second ancient shipwreck just a few hundred meters south of the Antikythera wreck.

Foley’s team used mixed-gas closed-circuit rebreather technology for their survey, which gave divers over half an hour of time underwater each day—much longer than prior expeditions. Furthermore, the Exosuit—described as “Iron Man for underwater science”—allowed divers to descend to 1,000 feet (over 300 meters) and remain underwater for several hours, with no need to decompress as they returned to the surface.

Since then, the Return to Antikythera project has recovered numerous additional items, and the team believes there could be hundreds more buried beneath the sediment. For instance, the 2014–2016 fieldwork yielded wood from the hull or decks, parts of two lead anchors, bronze nails and spikes, bronze spears from statues, glass bowls, ceramic decanters, a gold ring, and several “puzzling bronze objects.”

The highlight was an ancient weapon known as a “dolphin”: a lead bulb with an iron spike on its tip that could be dropped through the deck and hull of an enemy vessel.

The divers also recovered parts of a human skeleton in 2016: a partial skull with three teeth, two arm bones, several ribs, and two femurs, all from a single individual. Because the bones were surrounded by iron objects that had corroded during their time in the ocean, all the bones were stained an amber-red from iron oxide.

Even more parts of bronze and marble statues were recovered during the 2017 excavation, along with a red marble sarcophagus lid, a large section of hull planking, and even more human remains. All of these will be closely examined to learn more about the wreck itself and the unfortunate people on board.

The 2022 expedition managed to relocate several natural sea-floor boulders (each weighing about 8.5 tons) that had been partially covering the wreck, allowing divers to explore new parts of the ship.

The marble head they recovered most likely belongs to a headless statue, dubbed “Herakles of Antikythera,” retrieved by the sponge divers back in 1900.

The marble plinth is being cleaned and restored; it was covered in various marine deposits. The objects will be analyzed with X-rays, among other techniques, while the teeth will undergo genetic and isotopic analysis.

The exact location where each artefact was found has been carefully documented and will be added to the 3D model of the site currently being developed. The team also collected sediment samples for micro-analysis in hopes of learning more about the dimensions of the wreck. The Return to Antikythera project will continue its work, and perhaps one day it will unearth more pieces of the original Antikythera mechanism—or something even more amazing.