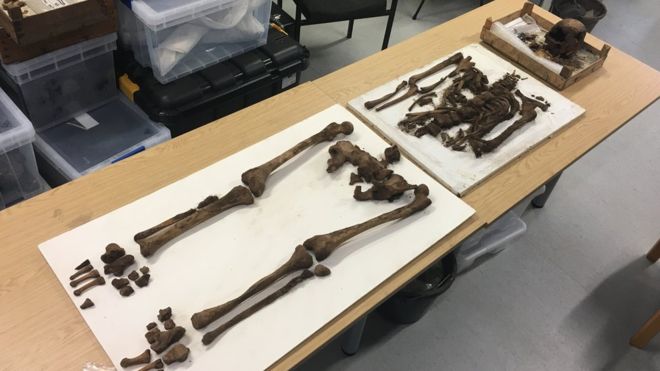 However, after closer inspections of his buttons, particularly the archeologists have pointed out that he will actually be a marine sailor from the Royal British Navy and that they think he died about 1760, the remains found in Chapelle Dom Hue at first it was thought to be those of a monk living in nearby Lihou.

Archeologist Dr. Phil de Jersey said that after a fascinating dig in 2017 and a further one in 2018 – which resulted in the find of a whole skeleton minus the hands, from the initial discovery of a tiny toe bone – it was good to finally find out more about the sailor’s story.

‘This is a young man probably in his teens or early 20s,’ he said.

‘He’s quite short, around 5ft 2in., and radio-carbon dating shows him to have died around 1760.

‘The buttons themselves gave us the best information from him, leather buttons that we could use for dating and we even found a button specialist to look at them.

‘They said it fits in with the date and the idea that he was a sailor from the Royal British Navy. It even looks like the design on them is an attempt at the Union Jack flag.

‘We had thought he might be a monk, but the dates are all wrong.’

Hypotheses have been made on how he died, including drowning after falling overboard from his ship and washing up on the west coast, where locals buried him where he was found.

He is missing his hands and there is a suggestion this could be down to them being the uncovered part of his body that fish would have eaten first, whereas the large hole in the skull could be the result of the remains being battered by the elements as they were washed up.

However, Dr de Jersey said the acidity of the soil in the islands could be another factor in the state of the remains, which have severely eroded.

He did, however, add that he still hoped to find out even more about the sailor.

‘We would look at re-burying him up at St Saviour’s,’ he said.

‘But it would be nice to keep him a bit longer and possibly get more information from his teeth, which can reveal more geographical data and more about his diet.

‘People are fascinating to dig up, as weird as it sounds, and that is because it is more personal than pottery or flint. These are real people, people that are lost to history that you can bring back to life.

‘We would love to find out even more about him.’

Also unearthed near the body was the remains of a porpoise believed to have been buried in the 15th century. This is what led to the find of the skeleton after a human toe bone was spotted exposed on a cliff edge about 10 meters away.