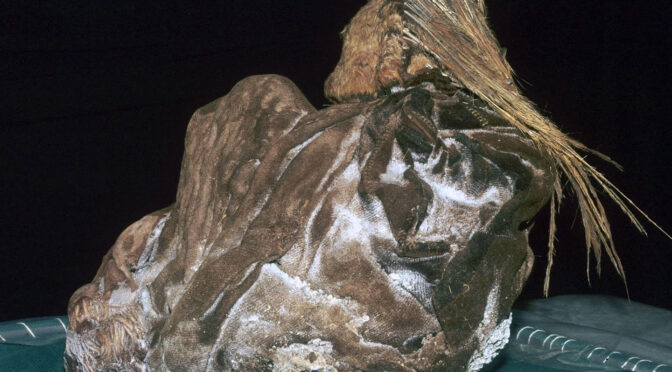 Two Inca children slated for ritual sacrifice more than 500 years ago quaffed a special soothing concoction that has gone undetected until now. Those young victims, most likely a girl and a boy roughly 4 to 8 years old, drank a liquid that may have lightened their moods and calmed their nerves in the days or weeks before they were ceremonially killed and buried on Peru’s Ampato mountain, a new study suggests.

The youngsters’ bodies contained chemical remnants from one of the primary ingredients of ayahuasca, a liquid concoction known for its hallucinogenic effects, say bioarchaeologist Dagmara Socha of the University of Warsaw, Poland, and her colleagues (SN: 5/6/19). Analyses focused on hair from the girl’s naturally mummified body and fingernails from the boy’s partially mummified remains.

While no molecular signs of ayahuasca’s strong hallucinogens appeared in those remains, the team did find traces of harmine and harmaline, chemical products of Banisteriopsis caapi vines, Socha’s group reports in the June Journal of Archaeological Science: Reports. In ayahuasca, B. caapi amplifies the strength of other more hallucinogenic ingredients.

Recent investigations with rodents suggest that solutions containing harmine affect the brain much as some antidepressant drugs do. “This is the first [evidence] that B. caapi could have been used in the past for its antidepressant properties,” Socha says.

While research on whether harmine can lessen depression or anxiety in people is in its infancy, archaeologist Christine VanPool of the University of Missouri, Columbia, thinks it’s possible that the ingredient was used on purpose.

Spanish documents written after the fall of the Inca empire say that alcohol was used to calm those about to be sacrificed, so other brews may have been used too, speculates VanPool, who was not part of Socha’s team.

“I tentatively say yes, the Inca understood that B. caapi reduced anxiety in sacrificial victims,” she says.

Spanish chroniclers may have mistakenly assumed that Inca sacrifice victims drank a popular corn beer known as chicha rather than a B. caapi beverage, Socha suspects.

No evidence of alcohol appeared in molecular analyses of the Ampato mountain children. But alcohol consumed just before being sacrificed would have gone undetected in the researchers’ tests.

Trace evidence did also indicate that both children had chewed coca leaves in the weeks leading up to their deaths.

Spanish written accounts described the widespread use of coca leaves during Inca rites of passage. Those events included ritual sacrifices of children and young women, who were believed to become envoys to various local gods after death.

The sacrificed children were found during a 1995 expedition near the summit of Ampato (SN: 11/11/95). It would have taken at least two weeks and possibly several months for the pair of Inca children to complete a pilgrimage from wherever their homes were located to the capital city of Cuzco for official ceremonies and then to Ampato mountain, Socha says.

Giving those kids a calming B. caapi drink as well as coca leaves to chew doesn’t surprise archaeologist Lidio Valdez of the University of Calgary, who did not participate in the new study.

Children may not have understood that they were going to die, but they had to endure the rigors and loneliness of a long trip while separated from their families, he says.